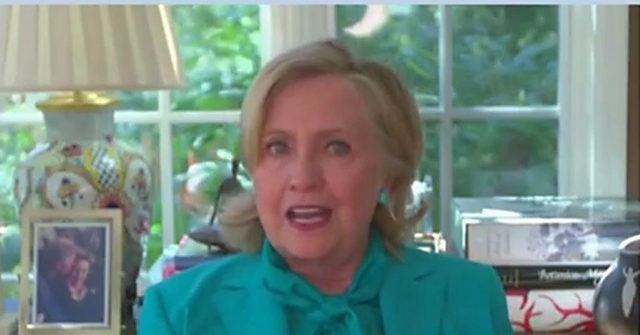 “Don’t forget Joe and Kamala can win by three million votes and still lose, take it from me,” she said, referring to her failure to win the electoral college in 2016. “We need numbers overwhelming so Trump can’t sneak or steak his way to victory.”

Clinton also revisited her frustration with Americans who did not vote for her in 2016.

“This can’t be another coulda, woulda, shoulda election,” she said

The former Secretary of State, who lost in two attempts to be the first woman president of the United States, clung to the notion that Russia stole the election from her and gave it to Trump.

“Vote for honest elections, so we, not a foreign advisary, choose our president,” she urged Americans.

“I wish Donald Trump knew how to be a president, because America needs a president right now,” she said, criticizing Trump for failing to “put his own interest and ego aside.”

Clinton also revisited the famous slogan she promoted throughout her political career, praising neighbors for helping fight the coronavirus crisis.

“Yes, it still takes a village,” she said.

She praised former Vice President Joe Biden and Sen. Kamala Harris (D-CA), but warned that as a woman, Harris would face the same “slings and arrows” as she did as a female candidate.

“This is the team to pull our nation back from the brink,” she said.

She warned voters not to get complacent and let Trump get re-elected.

“As Michelle Obama and Bernie Sanders warned us, if Trump is re-elected, things will get even worse,” she said. “That’s why we need unity now more than ever.”