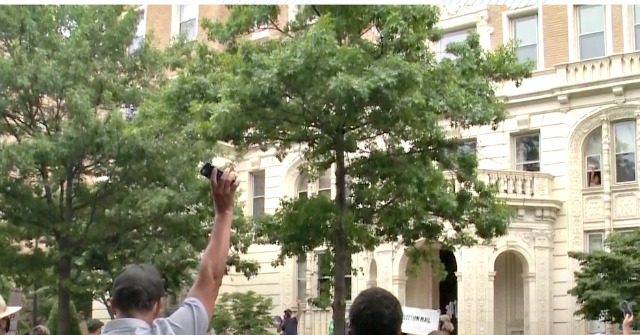 The far-left group Shutdown D.C. rallied its supporters to surround the home of Postmaster General Louis DeJoy’s home in Washington, DC, on Saturday after Democrats claimed President Donald Trump and DeJoy — whom Trump selected for the job — were making changes at the United States Postal Service that could interfere with voting by mail in the 2020 election.

This morning we stopped by @USPS Post Master General Louis DeJoy’s house to give him a wake up call. We need the postal service to #DeliverDemocracy this fall. Stop the attack on our mail! #USPSisEssential #USPS2020VOTE https://t.co/a8KmFt5hIU

The local CBS affiliate USA9 reported on the protest, which it called a “noise demonstration” meant as a “wake-up call” to DeJoy and the Trump administration:

The organization believes DeJoy is “dismantling” the U.S. Postal Service in favor of President Donald Trump’s re-election. They said his actions contribute to voter suppression.

“DeJoy has fired or reassigned much of the existing USPS leadership and ordered the removal of mail sorting machines that are fundamental to the functioning of the postal service. Meanwhile, mail delivery is slowing down under other decisions made by DeJoy, such as eliminating overtime for postal workers,” the group said in a statement.

The USPS recently sent letters of warning to 46 states, including Maryland, Virginia and the District of Columbia, indicating that it could not guarantee all mail-in ballots cast for the November election would arrive in time to be counted. D.C. and six other states were told that only a narrow set of voters may be affected, but Virginia and Maryland and 38 other states received a “heightened warning” that USPS could not meet state-mandated deadlines.

USPS officials said it would run out of funds by the end of September without more federal funding, the Associated Press reported. The postal service reported a $4.5 billion loss in the first quarter.

“We just heard that @OIGUSPS is investigating all aspects of our request to audit the Postmaster General’s operational changes at @USPS & his personal conflicts of interest,” Warren posted on Twitter. “I’ll keep using every in the toolbox to stop Trump & DeJoy from sabotaging the USPS.”

“We are in receipt of the congressional request and are conducting a body of work to address concerns raised,” a spokeswoman for the U.S. Postal Service inspector general, Tammy L. Whitcomb, said.

The USA9 report said that Rep. Gerry Connolly (D-VA), chairman of the House Subcommittee on Government Operations, is calling for DeJoy to step down. Connolly said in a statement

Postmaster General DeJoy’s brief term has already become one of the darkest in USPS history. On the eve of a presidential election, in the midst of the worst public health pandemic in 100 years, Mr. DeJoy has pledged his allegiance to the political expedience of President Trump at the expense of protecting our democracy and access to the ballot. He has deliberately enacted policies to sabotage the Postal Service to serve only one person, President Trump. He has failed the American people. Mr. DeJoy must resign.

But Trump has been a fierce supporter of the post office and wanted to bring DeJoy (who is demonized by the left for being a wealthy donor to Trump and the Republican Party) on board because of his success as a businessman.

I will never let our Post Office fail. It has been mismanaged for years, especially since the advent of the internet and modern-day technology. The people that work there are great, and we’re going to keep them happy, healthy, and well!