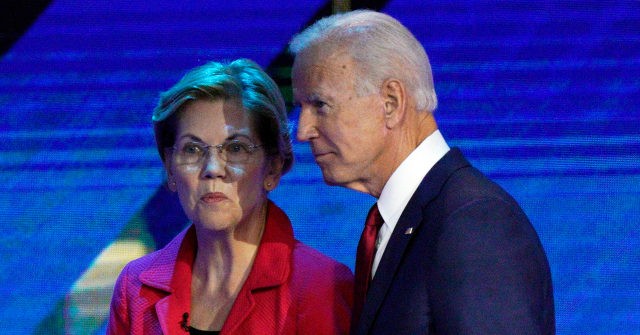 Sen. Elizabeth Warren (D-MA) has a “big list” of agenda items for a Biden administration, which she previewed during an appearance at the virtual Netroots Nation conference on Friday.

The former Biden rival — known on the campaign trail for her lofty progressive proposals to implement an “Ultra-Millionaire Tax” and cancel student debt on the first day of her presidency — said she has a “big list” of agenda items for the Biden administration to tackle should Joe Biden (D) defeat President Trump in November:

“Finally, we can demand that our Congress make the real changes statutorily that we need to make. We need to get everybody on a path to citizenship,” she explained. “These are changes we need to make.”

Warren added that she has a list for several agencies, including the Department of Education and EPA:

Have I got a list for the Department of Education, oh! And a list for the Treasury Department and a list for the EPA. We got a lot of people who want to do that work. So I think of this as, you ask me what are we going to start doing on January 21, and my answer is, it’s actually all the pieces we start putting in place, at the latest, starting on November 4, the day after the win that people are lined up, and they are ready to go.

Warren continues to serve as a fundraising machine for the Biden team, raising $6 million for the campaign after a single June fundraiser.

Many progressives believe she will serve as an influential progressive figure if Biden lands the presidency.

“Warren will play a big role in laying out an economic agenda with a focus on the working class and middle class,” Rep. Ro Khanna (D-CA), former co-chair of Sen. Bernie Sanders’ (I-VT) campaign, stated.

“Whether from the senator or from the administration, she has the brilliance to help shape policy,” Khanna added.