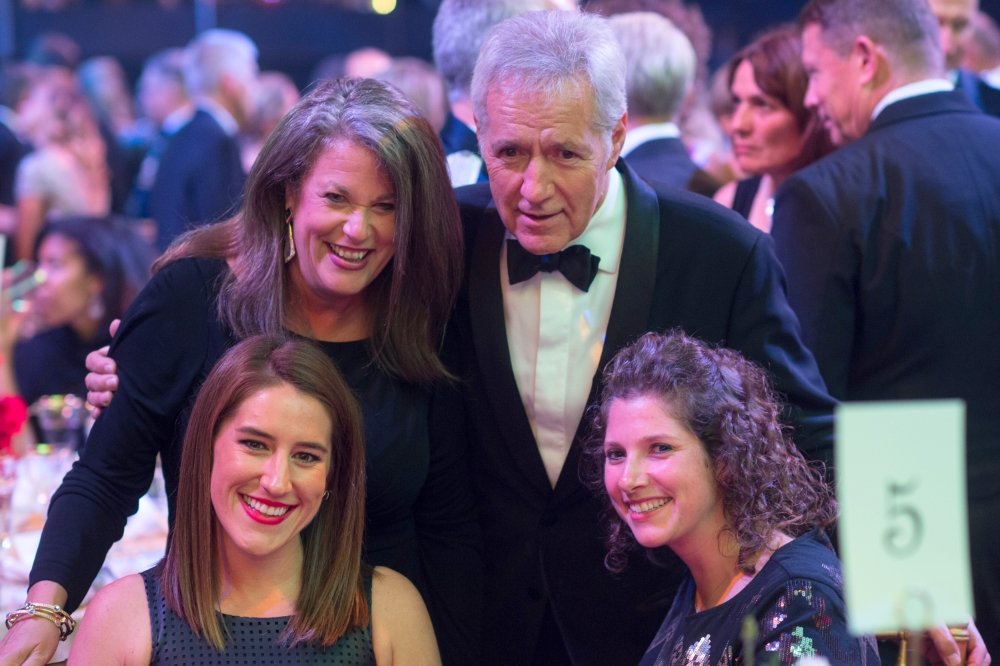 The new memoir of “Jeopardy!” host Alex Trebek goes a long way towards explaining the quiz show’s success — but not in the way one might think.

Sure, The Answer Is…: Reflections on My Life includes nuggets and insights on the show. Trebek, for instance, discusses famous contestants like Ken Jennings and James Holzhauer, and the infamous football category (for which Trebek himself developed a sequel category about officiating). He drops tidbits of interest to devoted “Jeopardy!” followers, like the fact that, while hosting, he crosses off clues on his paper gameboard with a Crayola crayon, to prevent him from reading the same clue twice (he previously used a marker, but that implement created noise picked up by studio microphones).

The book also contains Trebek’s reflections on life, and living, since his pancreatic cancer diagnosis more than one year ago. He writes about wearing a hairpiece — which he has since a December 2017 fall required cranial surgery to remove blood clots in his brain. Trebek’s description of the pain he has suffered from cancer and chemotherapy will elicit sympathy from readers. While disclosing in publicity interviews for the book that he (briefly) contemplated suicide, Trebek has continued his hosting duties, refusing to delay “Jeopardy!” tapings, despite excruciating pain during some of them.

The memoir’s first 100 pages contain many events and details involving both the enduring success of “Jeopardy!” and the grace with which Trebek has handled his battle with cancer. A grounded upbringing from humble stock provided the perspective necessary to propel a hit television show and endure a grueling medical prognosis.

The Secret to the Show’s Success

In the book, Trebek hits the nail on the head when discussing the success of “Jeopardy!” success: “It should never be about the host. Every moment you focus on yourself is a moment that you’re taking away from the contestants.” By and large, Trebek has followed this important advice, rarely distracting from a fast-paced (and intense) game by showboating for the cameras. The one time he forgot his advice — during a guest appearance moderating a gubernatorial debate in 2018 — Trebek received criticism in large part for putting too much focus on himself and not on the two candidates running for office.

Trebek also writes that “you could replace me as host of the show with anybody and it would likely be just as popular.” No, it wouldn’t. Another host could easily try to dominate proceedings, a la Steve Harvey on “Family Feud.” Even hosts of similar shows couldn’t necessarily pull off Trebek’s understated style. During briefings before my appearance on “Who Wants to Be a Millionaire?,” one of the producers mentioned that Regis Philbin, the show’s original host, felt the need to find something about the contestants to (gently) needle them about. Dropped into the “Jeopardy!” set, however, and Philbin’s comedic personality would likely have clashed with the subdued tone necessary for the show to succeed.

Humble Roots, and a Humble Host

Trebek’s youth and upbringing explain so much about his years as a television host, and his life in (or quite often out of) the public eye. Born in the Ontario mining town of Sudbury, his father, George Edward Terebeychuk, emigrated from Ukraine in the 1920s. Trebek writes that seeing his father work as a chef helped him “learn the value of the little things in life: the importance of punctuality; the rewards for hard, honest work; the pride of properly arranging tables and chairs; the camaraderie of a staff…working together in harmony.”

While he says he didn’t realize it at the time, the young Alex and his friends grew up poor, “just lower-middle-class kids from lower-middle-class families.” His parents scraped and saved, funding his tuition at a Catholic boarding school. While there, the priests looked for ways to offer Trebek financial assistance; one “wasn’t so much a spiritual adviser as a banker.” Financial concerns remained foremost in Trebek’s mind as he went to the University of Ottawa; he majored in philosophy largely because he could attend classes in the mornings, and work at the Canadian Broadcasting Corporation to fund his tuition in the afternoons.

His modest roots, coupled with two decades of journeyman work as an announcer and game show host in Canada and the United States, made Trebek a man of little ego when the 1984 revival of “Jeopardy!” gave him a ticket to stardom. That vein of humility runs throughout the book: His devotion to volunteering (“We can make differences in simple ways and significant ways that don’t cost much”); his work to encourage contestants (which this observer witnessed in person during a taping late last year); his practical choice of a Dodge pickup truck; and his well-documented fondness with home repair.

Even Trebek’s lone example of a tabloid-style scandal — he divorced his first wife, Elaine, eventually marrying a woman two decades his junior — took place in an understated manner. His current wife and his ex-wife remain on good terms, part of a “very close-knit, happy family.” As someone who met his half-sister through an appearance on “Jeopardy!” — you read that right — I noted with interest Trebek’s admission that he discovered a long-lost half-brother not long after started hosting the show.

Written in a few short weeks with a team that included longtime “Jeopardy!” producer, and former contestant, Rocky Schmidt, the book contains the trademark deadpan humor that leavens Trebek’s personality on and off the set. His description of Mark Twain as his favorite philosopher and author comports with his discussion of cursing as a redeeming vice, along with quips that respond to frequent questions from audience members (“What do you do when you’re not working?” “I drink.”) and characterize people and events in his life.

Towards the end of the tome, Trebek discusses one of his favorite mottos: “A good education and a kind heart will serve you well throughout your entire life.” In revealing how Alex Trebek developed his kind, humble heart, The Answer Is… also provides the story behind the remarkable and steadfast success of “Jeopardy!” for the past 36 years — and hopefully for years to come.