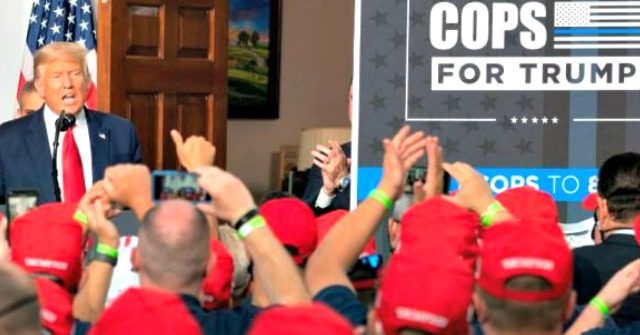 Trump welcomed a group of enthusiastic New York City officers to his club in Bedminster, New Jersey, for an event to announce the endorsement.

The police union president, Patrick Lynch, gave a passionate speech thanking the president for standing up for law enforcement at a time when many were afraid to do so. Lynch said:

I cannot remember when we’ve ever endorsed for the president of the United States until now. That’s how important this is. …. Mr. President, we’re fighting for our lives out there we don’t want this to spread to the country, we need your strong voice across the country.

Trump delivered a speech warning of the dangers they were facing if former Vice President Joe Biden and Sen. Kamala Harris won the presidential election.

“As we gather today, our country is suffering from a radical far-left movement,” Trump said, noting that Democrats wanted to “defame, demoralize, defund, dismantle, and dissolve our great police departments.”

The left-wing mobs, he said, were running around vandalizing churches like St. Patrick’s Cathedral in New York City and painting messages such as “Cops must die” and “Kill all cops” in the city.

He also recalled stories of police officers getting run down by a car, hit with Molotov cocktails, and even beaten in the streets during a summer of protests and riots.

Trump criticized New York City Mayor Bill de Blasio for failing to back police officers while they were under siege from the left, saying the mayor was afraid of the mob.

Lynch thanked Trump for his speech.

“The sign of a leader is someone who will stand at a podium like this and speak the truth and will say what needs to be said and will not be afraid to do it,” he said.

The event took on the feeling of a Trump rally as supporters in the room applauded and cheered during the president’s remarks.

The audience cheered the loudest for the “Sleepy Joe” nickname.

“I’ll tell you one thing, Putin and Kim Jong Un and President Xi of China, they’re not sleepy,” Trump said. “We can’t have slow, sleepy people dealing with them.”