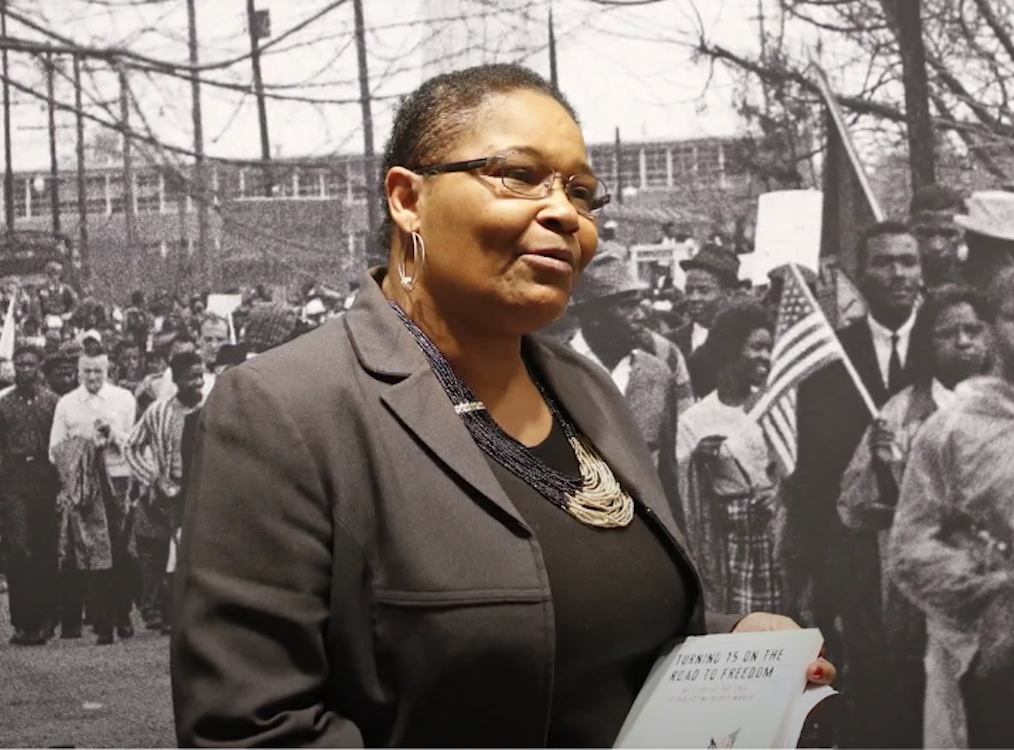 Lynda Lowery was just 14 years old when she was beaten by a racist sheriff’s deputy on the Edmund Pettus Bridge during the 1965 Bloody Sunday March from Selma to Montgomery, Alabama. She was the youngest marcher on the bridge that day, and it changed the course of her life. She became a civil rights activist, and was jailed 11 times before her fifteenth birthday.

Today, there’s a movement underway rename that bridge, which was built in 1940 and, like a lot of things in the South, is named after a Confederate general. The recent death of Rep. John Lewis has renewed an effort to name the bridge after him. Lewis was also attacked and badly beaten by a state trooper on the Bloody Sunday March, and he returned to the bridge every year to commemorate it.

In a recent interview with NPR’s Robin Young, Lowery explained that, like Lewis himself, she doesn’t want to change the name of the Edmund Pettus Bridge—not even to honor Lewis. “I love and admire him, but I don’t want the name of my bridge changed.”

This was also Lewis’s position on the matter. In a 2015 op-ed he wrote with Rep. Terri Sewell, Lewis explained the folly of trying to hide history by renaming things:

Renaming the Bridge will never erase its history. Instead of hiding our history behind a new name we must embrace it—the good and the bad. The historical context of the Edmund Pettus Bridge makes the events of 1965 even more profound. The irony is that a bridge named after a man who inflamed racial hatred is now known worldwide as a symbol of equality and justice. It is biblical—what was meant for evil, God uses for good.

Lowery echoed this idea in her NPR interview, saying, “Our blood and tears are embedded in the cement of that bridge,” and that, “If there had not been that Confederate history, there wouldn’t have been a need for a civil rights or voting rights history.”

Robin Young seemed to have a hard time wrapping her head around the concept, and kept pressing Lowery about why she would want to “leave the name of an avowed racist” on the bridge.

Apparently lost on Young is the notion that the names of places that might serve to honor in one generation can remind, and sometimes remind painfully, in the next. So it is with the Edmund Pettus Bridge, which stands now as a stark reminder, not only of the folly and poison of Pettus’s racist ideology, but also of the courage and perseverance of black Americans like Lewis and Lowery, who may have been beaten on that bridge in 1965 but in end were victorious in their cause.

Lowery understands the importance of language, and fidelity to it, in our remembrance of the past. She went on to say that it took many years for her to be able to talk about what happened on the bridge, but when she was finally ready to tell her story she didn’t pull any punches. She doesn’t shy from saying the deputy who attacked her on the bridge called her a “ni–er,” for example. “I use those words because that’s the words that were used.”

She added that honoring Lewis’s legacy means taking action, not hiding behind the cheap virtue of renaming a bridge: “If you really want to do something, then find out what Selma is and what it needs, and help Selma that way.”

Our debates over renaming places and objects from the past will no doubt rage on, whether it’s the Edmund Pettus Bridge or Fort Bragg or the many cities and towns named after Christopher Columbus. What’s too often lost in this debate is that names and places take on new life and come to mean new things, largely thanks to people like Lewis and Lowery, whose courage and sacrifice have redeemed the bridge as a symbol of justice, transforming its meaning for those who come after them.

Whatever Pettus represented to the people who first named the bridge, today his name stands as a warning to all those who are tempted to adopt his hateful ideas, and an inspiration to all the rest of us, who with Lowery and Lewis celebrate his utter defeat.