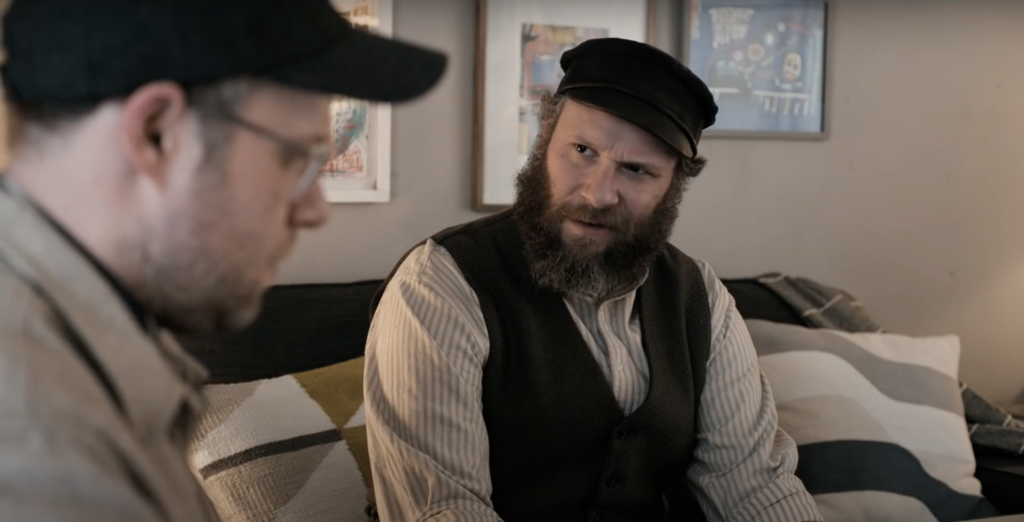 There’s a lot to like about “An American Pickle,” HBO Max’s new Seth Rogen flick, which is a surprise success on several levels. It’s both an on-demand release and a hilarious comedy, and a provocative cultural satire that resists the urge to get bogged down in anti-Trump politics.

Based on a Simon Rich novella, the movie documents the smart, absurdist tale of an Eastern European immigrant who literally gets pickled for 100 years, wakes up in modern America and meets his grandson. Both grandfather and grandson are played seamlessly by Rogen himself.

Skeptics might expect Rogen’s outspoken liberalism to hamper the topical film’s humor, but it’s actually a rich, provocative, and timely satire on cancel culture, more interested in having the conversation than insisting it’s already over. Herschel, Rogen’s likable, industrious, immigrant grandfather, proves a perfect foil for Ben, his millennial grandson, a Brooklyn-based app developer with a liberal worldview. He’s also a foil for Ben’s neighbors, whose response to Herschel makes an interesting point about generational culture clashes, and the way Americans perceive their ancestors and history.

What’s more, the jokes are on par with Rogen’s classic movies, which is impressive both for an on-demand release and, sadly, for comedies in general these days. It’s seriously funny, and not insufferably political.

With the fate of Hollywood comedies shifting increasingly to streamers, funny films have been few and far between. They just haven’t stacked up to their theatrical predecessors—although the genre’s current theatrical offerings haven’t really measured up either. From “Brittany Runs A Marathon” to “Wine Country” to “Palm Springs,” on-demand comedies always seem to underdeliver, serving up laughs every ten minutes, always with a side helping of mediocre emotional gravity.

“American Pickle” has the emotional gravity, but it goes down much more smoothly given the film’s sharp script, silly gags, and smart commentary. If future filmmakers model their on-demand (or theatrical) comedies on “American Pickle,” we could be in for a renaissance.

Newsmax interviews Tina from the Bronx…