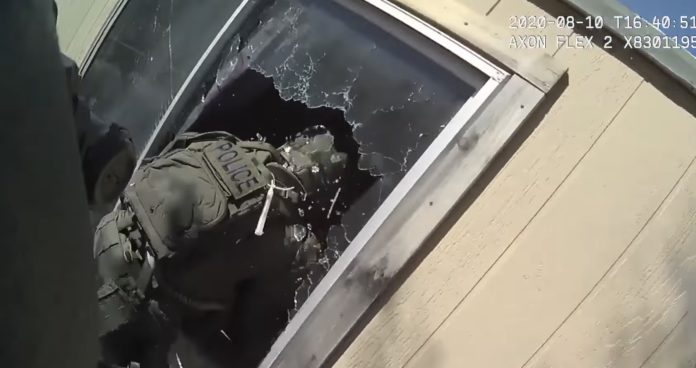 LAS VEGAS — (Scroll Down For Video) — On August 10th, officers at the Northeast Area Command were notified in a morning briefing that 32- year-old Joshua Squires was being sought in connection with an arson investigation from earlier in the evening. It was known to officers that Squires lived in a mobile home
located at 3755 North Nellis Boulevard.

Information was received that Squires had returned to the mobile home where he was staying and Crisis Negotiators and SWAT responded. Negotiators contacted a female inside of the mobile home who stated she was Squires’s mother. She stated he was armed and would not allow her to leave. Other family members who were able to get out of the mobile home told officers that Squires was threatening to set the trailer on fire. A hostage rescue plan was put in place and distracts were deployed as Swat
Officers entered through a sliding glass door. As they entered, Officer Goodrich observed Squires pointing a handgun at him. Officer Goodrich fired several rounds striking Squires. A tactical medic tended to Squires and pronounced him deceased at the scene. The hostage did not sustain any injuries during the rescue.