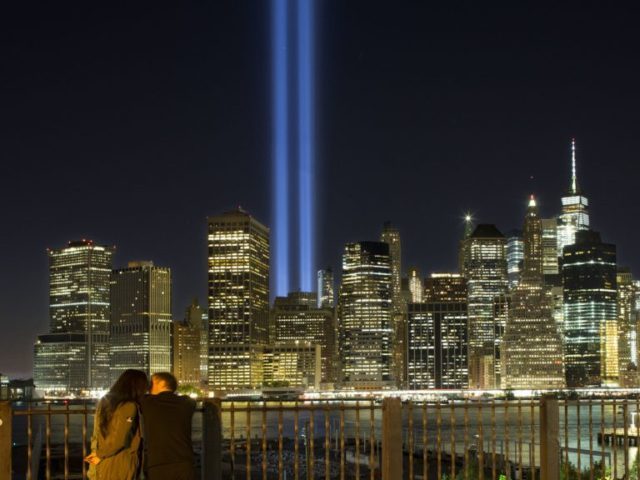 “The iconic Lower Manhattan 9/11 memorial display that features twin beams of light to honor victims of the terror attacks will not shine this year over coronavirus concerns,” reports the New York Post.

“The annual ‘Tribute in Light’ display requires a large crew to pull off … posing health risks this year that ‘were far too great.’”

Well, that’s some Grade-A horseshit and we all know it.

What? They can’t wear masks while installing the lights?

I thought masks cured everything?

Don’t get me wrong, I’m not arguing the city should require people do this work during a pandemic. But I think we all know there would be enough volunteers. I mean, I know New York has gone insane in the Trump Era, but I have no doubt enough skilled volunteers could still be found.

As everyone is saying on the Twitters, where was all this concern about close working conditions during the coronavirus when city employees were tasked with painting “Black Lives Matter” in front of Trump Tower?

You’ve all seen the photos. Check out all that city worker proximity going on there.

Also canceled is the in-person ceremony at Ground Zero where, among others, family members read the names of the 9/11 victims.

So instead of the iconic light tribute, an “alternative” has been announced where some buildings will be “lighting up their facades and spires in blue on 9/11.”

Also, thankfully, a nonprofit called the Tunnel to Towers Foundation will hold the name-reading ceremony in Lower Manhattan.

We all know what’s going on here…

What’s more, since that terrible day nearly 20 years ago, some 250 NYPD officers have died of cancer and other diseases directly related to the long periods of time they spent in the rubble searching for survivors. It should be noted New York firefighters have suffered even worse losses.

September 11 also gives Americans a sense of togetherness, it sparks our sense of unity and patriotism. But that was New York then…

Today New York and Democrats and the media that protect them are aggressively looking to normalize disrespecting our flag and anthem, smearing our founding as an act of white supremacism, desecrating our Founders as white supremacists, and canceled this year’s Fourth of July celebrations … even as they encouraged, championed and even joined in the mass protests that violated social distancing rules, the mass protests that resulted in mass looting, mass arson, mass assaults, murder, and a spike in coronavirus cases.

Another thing we all know is that this is the beginning of the end of 9/11 tributes.

Come on… Does anyone doubt the media and America’s increasingly extremist Democrats, like New York Mayor Bill de Blasio, hate this annual tribute — that they resent it and want to see it eliminated — just like they want to see Mount Rushmore, monuments to our Founding, and monuments to the valiant men who fought for the Confederacy during the Civil War (yeah, I said that, because it’s true), destroyed?

The left’s “revolution” requires the erasing of our history, most especially the inconvenient history that puts a lump in our throat and reminds us that almost all of our police officers are decent and selfless.

You see, the message of September 11, 2001, gets in the way of the left’s plan to destroy all the gains made by black America under Trump by destroying our cities. September 11, 2001, reminds us the phony anti-police cause the left-wing terrorists in Antifa and Black Lives Matter use as a shield to justify their terrorism is just that — phony.

New York is dead and it ain’t coming back.

I don’t blame elected Democrats. They are who they are.

I blame the citizens of New York. They voted for this, and Mayor de Blasio continues to govern with their consent. New York’s next mayor will be just as bad or worse.