OKLAHOMA CITY (KFOR) — After strapping on some rollerblades, it didn’t take 9-year-old Jordan long to show off his skills. He then took a ride on pedal boats with his adoption worker at an Oklahoma City park. Afterward, Jordan was thrilled to meet some of his heroes: Oklahoma City police officers.

When asked what he wants to be when he grows up, Jordan answered, “A police.”

Then he explained why: “Because they’re fun and they protect people.”

Jordan lives in a group home. He went into the care of the Oklahoma Department of Human Services six years ago, along with his little brother Braison. Back then, the siblings lived in separate group homes. Braison has since been adopted, and Jordan says he doesn’t get to see his little brother much anymore.

Now, the 9-year-old, who will be 10 in October, hopes he’ll soon find a family of his own. “The reason it’s important is because so I could have some people to talk to anytime I need to. I hope one of y’all pick me.”

There are currently 7,791 children in Oklahoma DHS custody. Nationally, there are more than 400,000 children in foster care, according to the most recent federal data. Of those, over 100,000 are waiting to be adopted.

Jordan said if he could go anywhere in the world, he would go “to an adoption party for a home.”

And if he were granted three wishes?

“To have a family, and family, family. Those are the only wishes I have,” he said. “I would just like to have a family to call mom and dad or just mom or just dad. I don’t really care.” 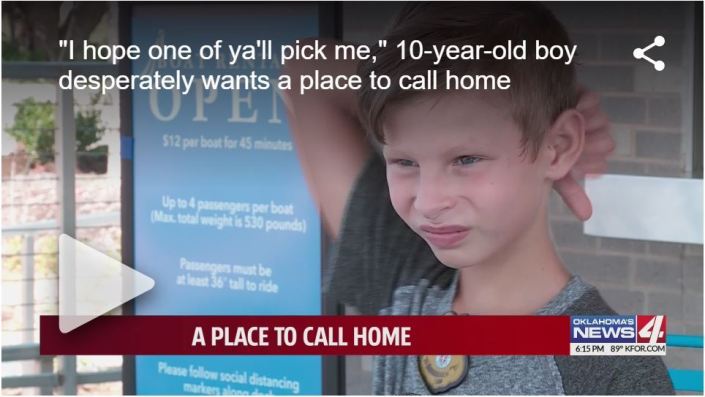