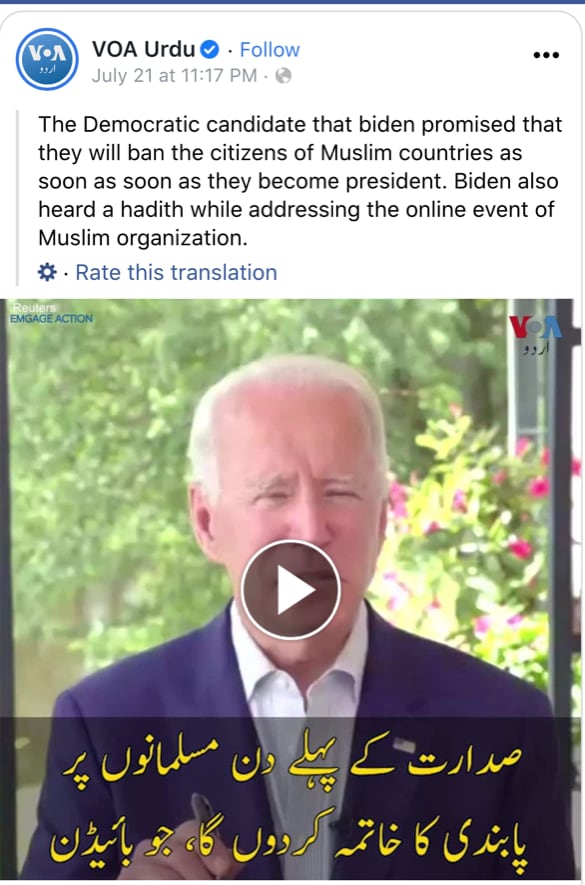 Voice of America employees are at it again and it appears that the agency’s management has failed to correct or remove numerous promotional videos for presumptive Democratic presidential nominee Joe Biden from its taxpayer-funded platform.

SaraACarter.com has published several reports over the past month concerning stories approved by VOA Urdu management that promoted Biden for president. The political ads targeted both Muslims in Pakistan, India and in the United States.

But now another VOA video promoting Biden for president to French and African viewers has surfaced.

On Wednesday, Dan Robinson at the watchdog group BBG exposed the story and how managers at VOA are continuing to allow videos supporting Biden to be published on the taxpayer-funded platform.

For example, VOA recently “allowed video content prematurely describing the wife of presumptive Democratic presidential nominee Joe Biden as ‘the future first lady’ to remain online for days despite complaints and warnings to employees about the need to exercise caution during the U.S. political campaign.”

The  video in question, said Robinson, appeared in a program on VOA’s French to Africa service.  According to BBG, the original report was produced at VOA’s central newsroom, “where writers produce material that is sent throughout VOA for translation by numerous language services for their broadcasts and websites.”

VOA Urdu employees are now under investigation by the agency after the story posted on this news site, according to an updated report.

The issue becomes extremely problematic because VOA, which was established in 1942, is considered the premier U.S. agency for global media outreach and is taxpayer-funded. In fact, the international broadcast entity has an average annual budget of roughly $234.7 million. The agency also employs roughly 1,078 people, as well as hundreds of foreign contractors.

Viewers overseas and in the United States of VOA’s French to Africa programs — content that is available globally including to U.S. viewers though the agency by law cannot prepare or direct material for or to Americans — brought it to the attention of journalists.

It’s unclear whether the reference to Jill Biden was a mistake, an ambiguity, or deliberate.  A copy of the original script obtained from VOA’s central newsroom does not contain the reference to Biden’s wife as “future first lady”.