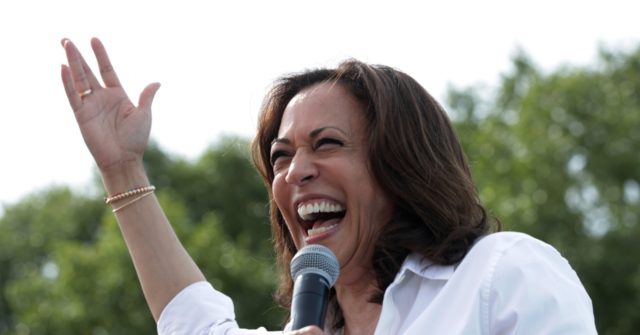 Members of the far-left soured at Joe Biden’s (D) selection of Sen. Kamala Harris (D-CA) as his running mate, expressing disappointment establishment Democrats did not heed the calls of progressives, many of whom supported Sen. Bernie Sanders (I-VT) and Sen. Elizabeth Warren (D-MA) during the primary race.

While Harris attempted to brand herself as a moderate during her presidential campaign, her record proves the label is inaccurate. Despite that, Harris is failing to resonate with many progressive voters, particularly given her controversial prosecutorial record.

“We are in the midst of the largest protest movement in American history, the subject of which is excessive policing, and the Democratic Party chose a ‘top cop’ and the author of the Joe Biden crime bill to save us from Trump,” Briahna Joy Gray, former national press secretary for Sanders, said.

“The contempt for the base is, wow,” she added:

We are in the midst of the largest protest movement in American history, the subject of which is excessive policing, and the Democratic Party chose a “top cop” and the author of the Joe Biden crime bill to save us from Trump.

The contempt for the base is, wow.

We could’ve had a candidate who responded to this by explaining to Americans why they are right to embrace Medicare for All.

Instead, look forward to three months of “I swear I don’t really like the popular thing that would save American lives and livelihoods.” https://t.co/gbDpUL80LD

Jordan Chariton of the progressive media company Status Coup appeared to hold the same sentiments, stating Biden gave the “middle finger to progressives, #BlackLivesMatter protesters, and black voters under the age of 50”:

I will add that regardless of ideology, I do think it is historic that a black woman is on the ticket.

Biden going with the strategically brilliant move of picking somebody for VP who is despised by both the right and the left.

The largest uprising of any kind in American history just took place against exactly the kind of policies Kamala Harris has instituted throughout her political career — and that uprising made zero impact on Biden’s decisionmaking for his VP pick. Pretty amazing.

He seems committed to not making it easy for leftists…

Just a nightmarishly bad pick in every way

The Trump campaign has since dismissed Harris as a “phony.” On Tuesday, President Trump reminded the public of her behavior during the contentious hearings for Justice Brett Kavanaugh

He also noted Harris was “nasty” to Biden during the primary race.

“She was probably nastier than even Pochahontas to Joe Biden,” Trump said. “It’s hard to pick someone that’s so disrespectful.”

Despite the disappointment from young progressives, Biden’s endorsement earned praise from establishment Democrats, including the Clintons and former President Barack Obama, who said Biden “nailed” the decision.