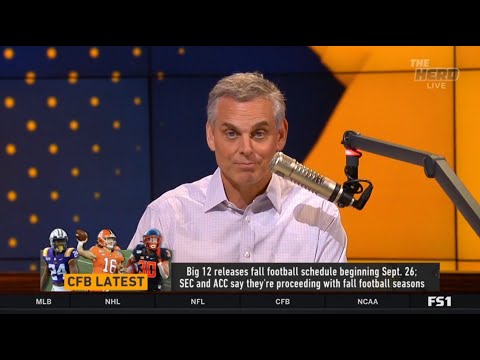 I see the downvotes as a request for more information. Let me go through the list.

Illinois: JB Pritzker, Democrat. He would likely try to keep Illinois and Northwestern’s football teams off the field. If not Pritzker, then mayor Lightfoot would try to keep Northwestern closed by not providing police support.

Indiana: Eric Holcomb, Republican. They are advertising in Michigan to go to Indiana if they want to access basic services. They have been far freer than their other midwestern states. Purdue and Indiana both could play.

Iowa: Kim Reynolds, Republican. They have been more open and have had less issues than other midwestern states. Iowa could play.

Maryland: Larry Hogan, Republican. He’s squishy as a Republican and they are very close to DC. He’d face a lot of pressure to not allow games.

Minnesota: Tim Walz, Democrat. The Golden Gophers play in Minneapolis and they have had great difficulty in securing areas of their city. They likely lack the police funding at the moment to secure games even if they wanted to play. I don’t think they would get support from the city or the state.

New Jersey: Phil Murphy, Democrat. He’s cracking down on businesses pretty hard. He’d be hard pressed to allow football games when he won’t allow gyms to open. There isn’t that much of a difference between athletic centers used by athletes and those used by the general public. Rutgers is a no go.

Ohio: Mike Dewine, Republican. He has not been a governor inclined to open things up. I think he would cave and allow OSU to play but grudgingly.

Pennsylvania: Tom Wolf, Democrat. Between him and his crazy secretary of health, he’d keep Penn State from playing.

Wisconsin: Tony Evers, Democrat. His emergency orders were overturned, I think Wisconsin would play if they wanted to.

So my TLDR is this… Schools were the governors wouldn’t interfere and would play. Wisconsin. Nebraska. Iowa. Purdue. Indiana. Ohio State (grudgingly).