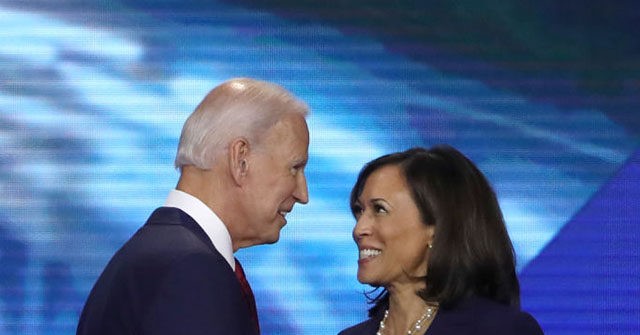 Former Vice President Joe Biden sent an awkwardly-worded email to supporters Tuesday about his chosen running mate, Sen. Kamala Harris (D-CA): “I’ve decided that Kamala Harris is the best person to help me take this fight to Donald Trump and Mike Pence and then to lead this nation starting in January 2021.”

The sentence could be interpreted as meaning that Biden had chosen Harris “to lead this nation starting in January 2021” — instead of leading it himself.

A more careful construction might have said “and then to help me lead this nation starting in January 2021.”

President Donald Trump’s campaign launched an immediate ad in response, noting that Biden had promised to be a “transition” candidate, and claiming that he planned to hand the “reins” to Harris.

Critics have long speculated that Biden, who will turn 78 years old before the end of the year, and appears to be showing signs of age, would not be fully in charge of his own administration.

Biden himself told an audience in Iowa in January that he would need to pick a younger running mate who “would be able to take over immediately” because he was “an old guy” who might die in office.

Harris, 55, was once a fierce rival to Biden in the Democratic Party presidential primary, and attacked him at the first debate over his former ties to segregationists and his opposition to school busing.

She was taken apart by Rep. Tulsi Gabbard (D-HI) a month later at the second debate over her record as a prosecutor.