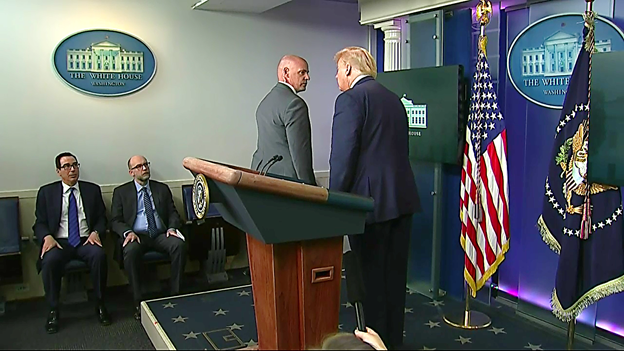 President Donald Trump was whisked out of his news conference by a Secret Service Agent Monday afternoon.

The Agent whispered something in the President’s ear, and immediately removed the president as he was addressing the media.

Trump later returned to the room and told reporters that the Secret Service shot someone outside of the White House.

“Someone was shot by law enforcement.” “I would like to thank the Secret Service.”

Officials say a 51-year-old man approached a Secret Service agent and advised he had a weapon. The unidentified suspect made a “drawing motion” and then “crouched into a shooter stance,” Secret Service spokesman Tom Sullivan said. The agent then shot the man in his torso. Both the agent and the suspect were taken to a hospital—conditions unknown.

Sullivan did not say if the man indeed had a weapon, nor did he say how the agent was injured. He declined to answer reporter’s questions.