Most presidential election polling throughout July had Democratic nominee Joe Biden in very safe territory. Many surveys showed him with a double digit lead and almost none showed President Trump in striking distance. That has changed over the past week.

Since the end of July, three of the four polls used by RealClearPolitics to form their average have Trump within four points. 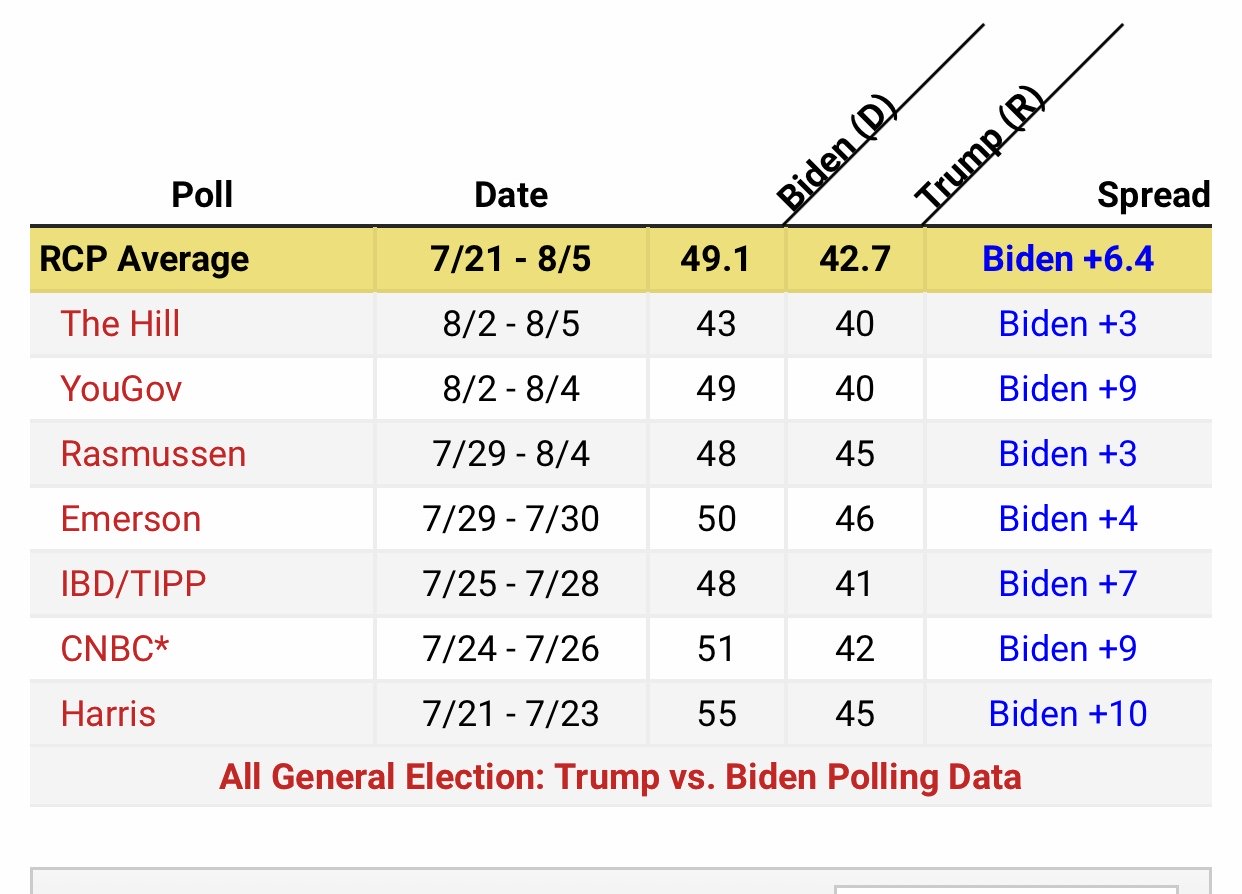 It’s a significant uptick for a president who had been experiencing some serious summer time blues. Over the past few months, Trump has suffered debilitating poll numbers on his handling of the Coronavirus crisis as well as the mounting rioting and lawlessness across the country. But on both issues it looks like Democrats may have overplayed their hand.

July saw the media move away from reporting on Wuhan virus deaths and hospitalizations to a new standard of counting case numbers. The Trump campaign and the media were well aware that a huge spike in testing would keep case numbers high and support the narrative that the worst is yet to come. But even the number of cases is now leveling off, and despite the media’s efforts, Americans can tell that worst of the virus’s destruction is behind us.

Meanwhile, promising work on a potential vaccine known as Operation Warp Speed, has led experts to predict that there will be a viable vaccine by the end of the year, perhaps even earlier. That will be the key to unlocking the lockdown and returning to normal.

On the economy, jobs continue to come back at a robust pace and many parts of the country are loosening restrictions on business. With his pen and phone last week Trump extended unemployment benefits without the help of Democrats, pulling the rug out from a confused House Speaker Nancy Pelosi.

Americans are growing frustrated with the rioting and looting that continues to sweep some cities like Portland and Chicago. The absurd Democratic talking point that Portland’s violence was created by federal officers is crumbling as local police, not feds, declare riot after riot, night after night in the City of Roses.

The bottom line is that Trump has had a good couple of weeks and it is reflected in polling. The wave may be small at the moment but it is moving in the right direction just in time to carry him to the convention at the end of the month. Joe Biden, who has been content to sit in the basement thus far, now has to play some offense, and he has two big chances to do it.

First will be his pick of a running mate, sometime this week presumably. That is a very different choice with a four or five-point lead than it is with a nine or 10-point lead. With the latter, Biden could worry less about votes and more about an eventual governing partner. Now at the very least he needs to be thinking about both. Because Biden chose to make demography destiny by promising to select a woman, likely of color, he has limited his ability to create a very exciting choice. Is there one who can really move the needle? And have the tightening polls played a role in the delay of the announcement.

Biden’s second shot is his convention. But this is not going to be a national convention in any typical sense of the word. Can the Zoom Hangout version really give his campaign a shot in the arm? Are there any tricks to be pulled out of that bag?

Biden is still winning, there is little doubt of that, but any air of invincibility is withering away. If Trump can stay close, even without gaining much more, Biden will have to engage more forcefully in the election, something Democrats have made little secret about wanting to avoid. With the start of convention season just days away, the American people have a tight, contested race on their hands.