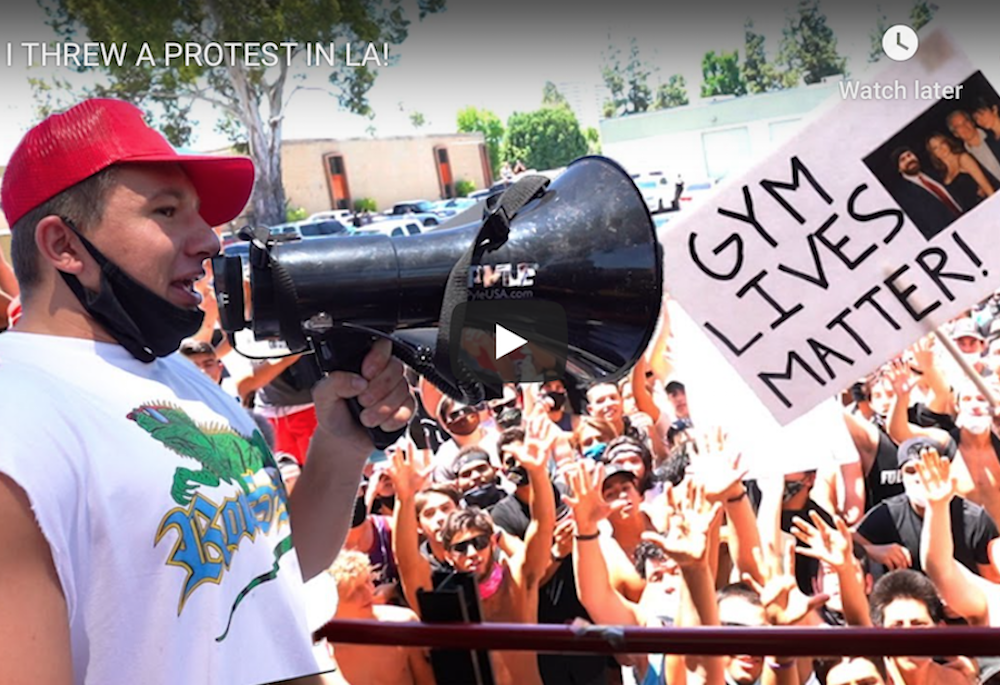 Steve’s “SteveWillDoIt” channel mostly consists of challenge videos in which he consumes very large amounts of food, alcohol, or cannabis. On Thursday the 21-year-old, called “Un-cancelable” by his fans, posted a video of the “brotest” to his YouTube channel that boasts more than 2.5 million subscribers. Steve was joined by fitness YouTuber Bradley Martyn, who owns a popular L.A. gym called “Zoo Culture.”

Before the march began, Bradley and Steve explained they were holding the protest because the government officials whose oppressive Wuhan virus rules have closed gyms, schools, and churches for months are ignoring mental and non-virus physical health. “We think gyms should be open for mental health, for physical health, and no one is talking about that enough and it needs to be talked about,” explained Bradley.

“The CDF,” said Steve, “Says f-ckin nothin about bein’ healthy.” Bradley interrupted Steve: “What the h-ll is the CDF?” making fun of Steve for presumably referring to the Centers of Disease Control (CDC) as the CDF.

At the protest, Bradley addressed a crowd of excited young men. “I see my boy got some biceps out there,” he said, pointing to a person in the crowd, “but I do want to say that I think, although we have all this stuff going on in the world, I think that people… sometimes lose sight of the physical health that’s important to all of us, the mental health that’s important for all of us.”

Steve, taking a big gulp of liquor from a full handle, spoke through a bullhorn, saying, “Now that I have some liquor in me, basically I don’t think I’d be where I am right now without the gym, and you guys. And I’m glad you guys are here,” he said. “So let’s go inside that gym and let’s loot the f-ck outta that gym!” yelled Steve, taking a jab at the Black Lives Matter riots that have inflicted violence and destruction on private property across the country, including Los Angeles. “No, no, no!” cried Bradley, “We’re not looting my gym! That’s not why we came here!” he laughed.

Once Steve and Bradley finished addressing the crowd of young people, they led hundreds of young men through the streets chanting “Open gyms!” and interrupting L.A. traffic while stopping to do push-ups. Rally-goers carried homemade signs that read “Gym Lives Matter,” “Big Lats Matter,” “Open the gym so I can send it,” and “Open Up Church.” A few protesters carried irrelevant signs like “Free Bill Cosby.”

Steve’s video is being promoted on Instagram by the “The Nelk Boys,” a separate YouTube channel Steve joined last year that has more than 5.4 million subscribers. Nelk has been dubbed one of the best prank channels on YouTube. Known for their brand name “Full Send,” the men’s videos have obtained a dedicated fan base of young people, mostly high school and college-aged men, who enjoy crass humor and hilarious pranks.

Nelk is not a political channel, but nothing is off-limits. Like SteveWillDoIt’s “brotest,” the Nelk boys have poked fun at liberal insanity, most notably with a popular video prank in which Nelk co-founder Kyle Forgeard holds up signs at Ohio State University that read “Illegal Immigrants For Trump” and “Transgenders For Trump,” “triggering” campus social justice warriors.

The response on Steve’s social media has been overwhelmingly positive. Despite the loud voices on the left, there are hordes of young people weary of political correctness and eager to consume woke-free entertainment.