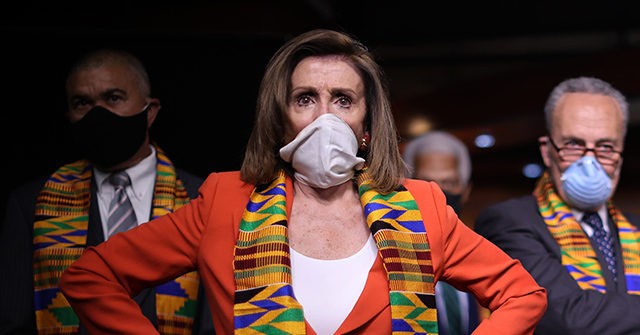 Pelosi said, “First of all, he is saying states have the money. No, they don’t. They have expenses from the coronavirus. They have lost revenue. Because of that, they are firing health care workers, first responders, teachers, and the rest, sanitation, transportation because they don’t have the money. Second of all, everything is left out — our assistance to the schools, feeding the hungry, helping people who are going to be evicted. The president’s moratorium, he just did a study to look at a moratorium. Something’s wrong. Either the president doesn’t know what he’s talking about. Clearly, his aides don’t know what he is talking about, or something’s very wrong here about meeting the needs of the American people at this time.”

She added, “The fact is, is that whether they’re legal or not takes time to figure out. I associate my remarks with what the senator who says, they’re unconstitutional slop. Right now, we want to address the needs of the American people. As my constitutional advisers tell me, they’re absurdly unconstitutional. Gut right now our focus —and that’s a parallel thing—right now the focus, the priority, has to be on, again, meeting the needs of the American people sufficiently allocating resources to send children to school, not threatening schools that if they don’t have actual attendance, they won’t get the federal dollars.”

Biden: No Legitimacy to Claims Hunter Profited off Family Name, ‘Desperate Campaign to Smear Me and My Family’