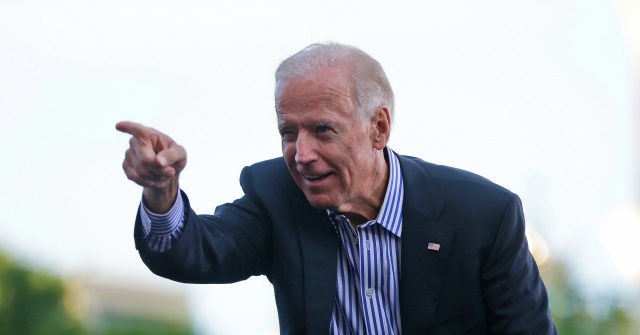 Former Vice President Joe Biden responded on Saturday to a question about his running mate choice, jokingly claiming to have selected a Fox News reporter.

While Biden was biking near his beach house in Delaware, Fox News’s Peter Doocy asked the presumptive Democrat nominee if he had decided who his vice presidential candidate will be.

“Yeah, I have,” Biden said. When pushed further, the former vice president claimed that the Fox News reporter was his choice for the post:

Shortly after the quip, Biden’s national press secretary took to social media to clarify that a running mate decision had yet to be finalized and that Biden was joking with Doocy:

Folks, this is clearly a joke. When Vice President Biden has made a decision on who his running mate will be, he will let the American people know. And can confirm, it’s not @pdoocy of @FoxNews. https://t.co/iMfqMGepTE

The joke came as Biden’s running mate search is winding down, a decision expected as early as next week. In recent days, the former vice president’s allies have signaled the two leading contenders are Sen. Kamala Harris (D-CA) and former Obama-era National Security Adviser Susan Rice.

Both women are considered exceptionally qualified for the post, but each has issues that are potentially problematic for the ticket.

Rice, in particular, is a moderate whose foreign policy views are likely antithetic to progressives, many of whom opposed the Obama administration’s actions in the Middle East. The former national security adviser has also come under fire recently from the left for her investments in fossil fuel companies. Were Rice to ascend to the ticket, she would also likely prove a controversial target for Republicans, who appear eager to relitigate the 2012 attack on the U.S. diplomatic compound in Benghazi, Libya.

Harris, on the other hand, has struggled to convince members of Biden’s inner circle, most notably former Sen. Chris Dodd, that she would be a partner in the White House, rather than a rival for power. The ill will towards Harris stems from the Democrat primaries in which the California senator savaged Biden for his longstanding position on busing to desegregate public schools.

Although Harris’s allies have attempted to paint such concerns about her as sexist, there is some indication that the former vice president himself is still bristling over the attacks. Last month, after a speech in Delaware, a photographer for the Associated Press captured handwritten notes that Biden had made about Harris’s vice presidential candidacy. Topping the list were the words “Do not hold grudges,” seeming to intimate Biden has not yet forgotten what transpired during the primary.

Like Rice, Harris could also prove a difficult sell to progressives as Biden seeks to unite Democrats ahead of the general election. During her own failed presidential bid, Harris struggled to overcome the image created during her time as a local and state prosecutor in California, where she championed tough-on-crime policies, especially pertaining to nonviolent drug offenses.

The inclusion of Rice and Harris at the top of the vice presidential short list has led some on the left to claim that Biden has signaled progressives “need not apply” to be his running mate.

At Least 5,800 Fully Vaccinated Americans Have Contracted COVID-19 – 74 Have Died