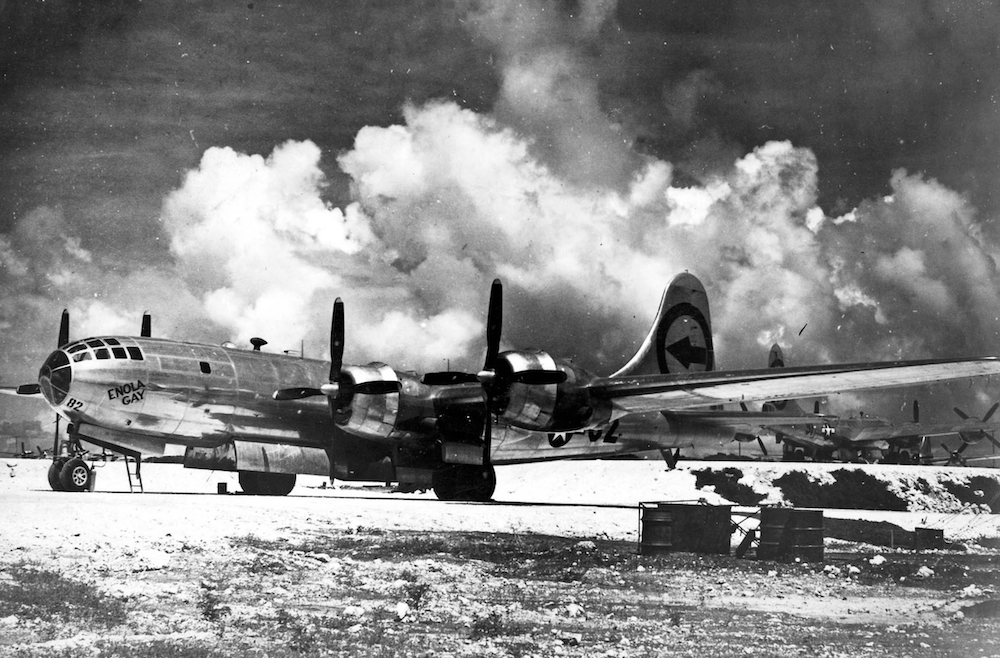 Seventy-five years ago, a U.S. Army Air Force B-29, the Enola Gay, dropped an 8,900-pound bomb over the Japanese city of Hiroshima.

Decorated with crude messages for Emperor Hirohito, Little Boy whistled downward for 44 seconds before bursting 1,900 feet above the center of the city. With a temperature eclipsing a million degrees Celsius, the detonation ignited the air, resulting in a fireball 840 feet in diameter with a brilliance 10 times that of the sun. The blast wave shattered windows over a distance of 10 miles and was felt over 37 miles away. With a destruction radius of one mile, the thermal pulse sent fires raging over four-and-a-half miles.

Hiroshima toppled, buildings were ripped from their foundations, bridges were twisted, and 70 percent of the city’s structures were broken to pieces. Radiant heat traveling at the speed of light caused flash burns, charring skin to charcoal. Somewhere between 70,000-80,000 souls were consumed instantly. Tens of thousands more would die slowly, days or weeks or even years later, succumbing to injuries or radiation sickness.

Unsurprisingly, an increasing number of people find this idea abhorrent. In 1946, the Federal Council of Churches censured the bombings as “irresponsible” and “morally indefensible.” A decade later, the Oxford philosopher Elizabeth Anscombe, the most formidable of the early detractors, penned a ferocious essay opposing her university’s awarding an honorary degree to President Harry Truman. Her critique hinged on two assertions that remain the primary objections today.

First, she condemned as “stupid” and “barbaric” the Allied demand for the unconditional surrender of the Japanese, who, she asserts, “were desirous of negotiating peace” and were desperate enough to accept any terms for ending the war “but for their loyalty to their emperor.” Second, against the obliteration of a populated city, Anscombe argued that “choosing to kill the innocent … is always murder.”

The first task of the ethicist is to get as accurate a description of the facts as possible. This is why ethics is so often best paired with history — with actual cases that clarify what’s at stake. If you get your historical facts wrong, your ethical analysis is hamstrung. Anscombe is undone by the history.

Father Bill Miscamble’s indispensable “The Most Controversial Decision” ably lays out the historic record — including intercepted communications between Japan’s political leadership, the minutes from the Japanese war cabinet’s meetings, and post-war interrogations — dismantling the assertion that Japanese leadership were anywhere close to surrender.

Instead, while the Japanese knew relatively early that they could never defeat the United States in a full-contact brawl, they gambled that they would not have to. They hoped only to bloody the United States enough to gain more favorable surrender terms, which included much more than continuation of the imperial system. Such a refusal to stand down not only unjustly prolongs war, it compromises achieving a durable peace, which is best guaranteed by a decisive victory. Looking at the concord that now exists, it seems a great good that the Japanese came to know they had been licked.

In any case, assurances regarding the safety of the emperor would have been premature prior to an examination of his wartime record. The legend of Hirohito’s pacifism, Max Hastings argued in “Retribution,” has been firmly discredited. Hastings found no evidence suggesting that Hirohito, at any point prior to August 1945, desired peace with any real conviction. While it was Hirohito who did finally orchestrate the surrender, we recall he did so only after two atomic bombs. If he wanted peace earlier on, his equivocating proved as deadly as the hardliners’ fanaticism.

One could argue against prosecuting the emperor, even had he proved guilty of war crimes, but the motivation could not have been justice. To have exonerated the emperor out of hand would have been to forward the suggestion that the lives of murdered Chinese, Malay, Koreans, Indonesians, British, Dutch, Americans, and near countless others counted for nothing. Justice demands the vindication of victims. Prudence or charity might overrule the requirements of justice, but it is not for the victimizers to demand that justice be overruled.

Anscombe’s insistence on the inviolability of innocent lives carried the stronger claim. But here, too, she collided with history. While her insistence that one must not “choose to kill innocent” is important, it is also very precise. One cannot say — though Anscombe appeared to — that American leadership chose the killing of innocents in Hiroshima in quite the same way as the Nazis chose to kill the Jews. Taking a more contemporary case, Truman did not desire the deaths of the people of Hiroshima in the same way that William Calley desired the deaths of innocents in My Lai.

It also matters that Truman and his advisers didn’t start their deliberations about how to end the war by contemplating out of whole cloth whether to drop a nuclear bomb on a city full of people. Context matters. Europe was rubble, her infrastructure and economy were ruins, and her people were broken and starving, homeless and displaced. The ghastly reality of Hitler’s war against the Jews was being laid bare as the horrors of Birkenau entered human consciousness. Stalin’s own rapaciousness was becoming increasingly evident even as communist insurrections and civil war threatened to engulf newly liberated nations. Across the Pacific, whole populations were suffering under the torment of Japanese occupation. The British were set to invade Malay.

The conventional bombers of Gen. Curtis LeMay’s 20th Air Force continued to incinerate whole cities. In the midst of all this, casualty estimates for the planned land invasion of the Japanese home islands continued to grow exponentially as Japan poured men and arms into Kyushu, strengthening the beaches that would be the first American objective.

This reminds us that innocents were found beyond Hiroshima. While it is true that American Marines are combatants, it remains equally true that many of them were conscripts or post-Pearl Harbor volunteers. This is to say that before they were Marines, they were civilians: sons and brothers, husbands and fathers, clerks, schoolteachers, and mailmen. That matters, especially in the face of Japanese intransigence in continuing a war they knew they’d already lost. Moreover, the invasion would have weighed most severely on the Japanese themselves, both the military and civilians, but primarily civilians. Okinawa served as grim forecast of what to expect in fighting across the homeland.

Doing Nothing Would Have Been Deadly

Detractors might argue that the United States would never have accepted the costs of forcibly entering Japan from the sea. Japan, they insist, was on her heels, tottering, and would soon starve. All America had to do was nothing. By simply maintaining the naval blockade, neither the bomb nor land invasion would have been necessary.

Such glib assurances ignore the human toll of doing nothing. The number of Japanese civilians who would have perished while the Allies waited for Japan to starve is horrific to contemplate. Moreover, as she died, Japan almost certainly would have made good on her commitment to slaughter thousands of Allied prisoners of war. Meanwhile, the fate of civilians in Japanese-occupied lands would have been horrendous. From January 1945 onward, an estimated 250,000 occupied persons died per month. Some have pegged it even higher, estimating that by August, nearly that number were dying per week.

A shortened war was a boon to the lives of the innocent. For American leadership and beleaguered people throughout the Pacific, locked in a contest with Japanese leadership and popular sentiment that preferred national suicide to defeat, the promise of the atomic bomb must have felt like deliverance.

The history is clear: If you wanted to save innocent lives, you dropped that bomb. The history, in turn, clarifies the ethics: The atomic bombing of Hiroshima was a horror, but it was a moral horror.

Dick Morris: ‘Democrats Are the Most Vicious Winners There Are’

AWESOME moment of freedom in Melbourne…