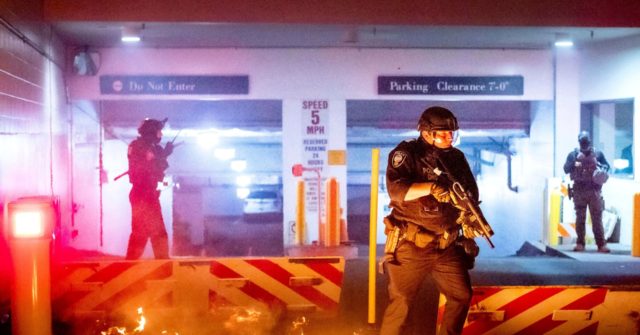 “When you commit arson with an accelerant in an attempt to burn down a building that is occupied by people who you have intentionally trapped inside, you are not demonstrating, you are attempting to commit murder,” Mayor Wheeler, who has remained relatively soft on demonstrators — even joining them last month — said.

“Don’t think for a moment think that you are if you are participating in this activity, you are not being a prop for the reelection campaign of Donald Trump — because you absolutely are,” Wheeler continued, attempting to deter violent protesters by warning of the possibility of unintentionally helping Trump’s reelection campaign.

“You are creating the B-roll film that will be used in ads nationally to help Donald Trump during this campaign. If you don’t want to be part of that, then don’t show up,” he said.

“I cannot and I will not tolerate that. This is not peaceful protests. This is not advocacy to advance reforms,” he said.

Their actions forced the Portland Police, which has tried to remain “hands-off” throughout the violent protests, to declare a riot:

#Antifa have started a fire on the front door of the Portland Police east precinct. They tore off the barricade and placed tinder around the fire. They’re trying to burn down the building. #PortlandRiots pic.twitter.com/2UN7o21dZy

Mayor Wheeler made headlines last month after joining violent protesters in Portland, only to find himself largely rejected by the crowd:

People have surrounded the mayor, cursing him and calling for resignation. pic.twitter.com/o0s1azbi2R

People in the protest crowd react to Portland Mayor Ted Wheeler saying he won’t commit to abolishing the police. pic.twitter.com/R0bwOjaG5B

Portland mayor @tedwheeler is escorted to safety by his security team. Angry protesters follow and try to assault him despite his support on the front lines of the riot. They try to go inside the building but is pushed back by Wheeler’s security. pic.twitter.com/zt8xVY1NDS

It was just one of a number of false claims that have erupted on the back of the riots.

Russian-American Relations Under Biden: More of the Same Except for One Thing