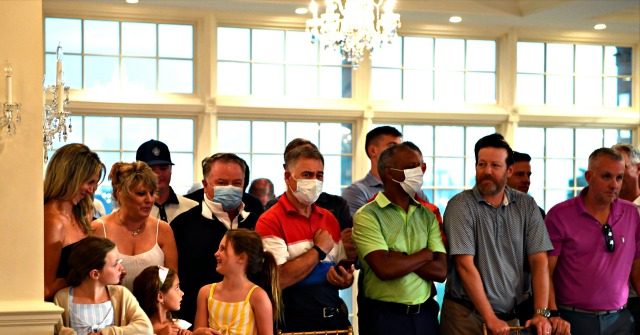 President Donald Trump defended a group of supporters who chose to attend a press conference as part of a “peaceful protest,” after a reporter complained that they were not following the CDC guidelines to prevent the coronavirus.

The press conference was held at Trump’s club at Bedminster, New Jersey, prompting a group of curious supporters to observe it from the back of the room.

During the press conference, Washington Post reporter Toluse Olorunnipa questioned why the president’s supporters standing behind them were not all wearing masks, remaining six feet apart, and following the New Jersey regulations and the recommendations from the Centers for Disease Control to help slow the spread of the virus.

The president’s supporters booed in response to the question.

Trump said that most of the individuals were wearing masks.

“I’d call it a peaceful protest because they heard you were coming up and they know the news is fake. They understand it better than anybody.”

Trump mocked reporters for asking biased questions during the press conference, including another question about Russia.

“If the press in this country were honest, and wasn’t corrupt, if it wasn’t fake, our country would be so much further ahead, but we’re doing really great.”

this is the scene pic.twitter.com/SbO20iBxa4

Awaiting @POTUS presser in Bedminster. Many members of his club are here not social distancing and not wearing masks.

A club official just told the crowd to “spread out a little bit” because “the tweets are going out” about their noncompliance with NJ regulations pic.twitter.com/bzyLVwqS0u