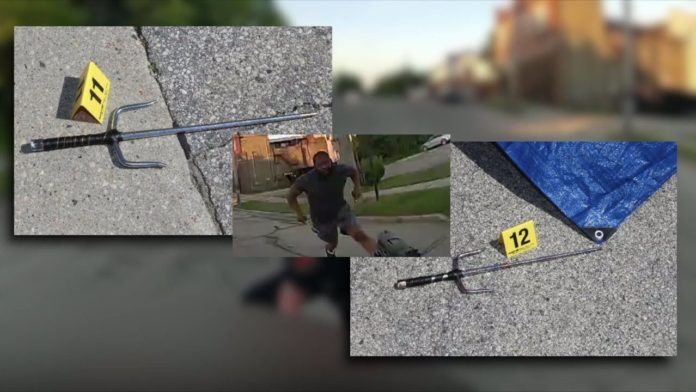 Sheboygan, Wisconsin — (Scroll Down For Video) — The Sheboygan County district attorney has determined that the use of deadly force was reasonable and no charges will be filed in the officer-involved death of Kevan Ruffin Jr. on July 2. At 5:50:32 AM, the Sheboygan County Dispatch Center received a 911 call reporting a disturbance involving weapons near S. 15th Street and Illinois Avenue in the City of Sheboygan. Video surveillance from the nearby business showed that prior to Officer Pray’s arrival there appeared to have been a disturbance between two people to the west of S. 15th Street between Illinois Avenue and Indiana Avenue. The disturbance was at approximately 5:50 AM according to the video. There was some pushing before one person ran towards a building and the other person, later identified as Kevan Ruffin, walked eastbound down an alley while holding onto something in each of his hands. At 5:52 AM, a Sheboygan Police Department squad car operated by Officer Pray pulled up next to a silver car at the intersection of Indiana Avenue and S. 15th Street.

Officer Pray began to sprint back toward the opposite side of the road and fired 3 more rounds while running away and 1 additional shot as he turned back around. After the 6 shots were fired, Ruffin was still running at Officer Pray, which is when the seventh round was fired.