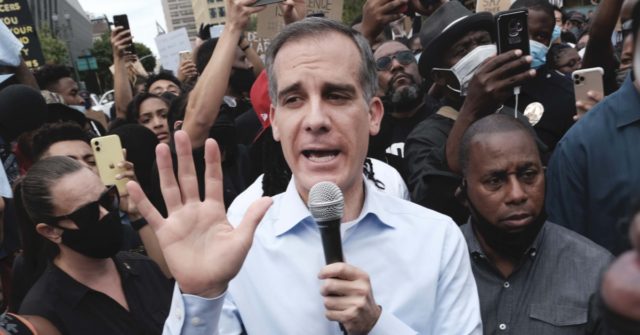 Los Angeles Mayor Eric Garcetti blasted house parties on Wednesday, saying that he would instruct city officials to cut off water and power to properties where “flagrant violations” of social distancing rules have taken place in recent days.

Garcetti was reacting to reports of large parties in the hills earlier this week, including one where people reportedly threw money from balconies — and where a gang-related shooting later killed one and wounded four people at the party.

We’re all stuck at home but here’s ppl throwing bills from a balcony. Hundreds are partying at a mansion in Beverly Park (above Beverly Hills). Complete with a poolside DJ and no physical distancing.@MayorOfLA What happens next? Are there consequences to breaking health orders? pic.twitter.com/pesYmc5otq

Last night, 1 person was shot & killed and 3 others were injured at the mansion party. https://t.co/dLrPLt3Tk0 https://t.co/UMLlT7ePVo

Local ABC affiliate KABC-7 reported that “there was little social distancing and even fewer masks” at the party. The party was reportedly staged to shoot a music video, according to one partygoer. Prior to the shooting, police paid a visit after neighbors complained about the noise, but their warnings were ignored.

Garcetti warned that house parties and other such events “ripple throughout our entire community because the virus can quickly and easily spread.”

Similar reductions in hospitalizations have taken place across Southern California.

Garcetti added that L.A. expressed condolences to victims of the recent explosion in Beirut, Lebanon, which is a sister city.