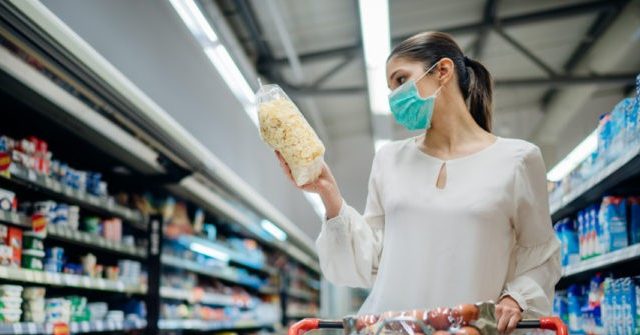 Well over three-quarters of Americans would support a nationwide mask mandate, a Hill-HarrisX survey revealed on Monday.

The survey, taken July 26-27 among 948 registered voters, asked, “Would you support or oppose a national mandate to wear a face mask?”

Voters appear to be united on the issue across various age groups, races, and party lines. A majority of Republicans, 66 percent, indicated they would support a nationwide mask mandate, as did 85 percent of independents and 93 percent of Democrats.

Dritan Nesho, chief researcher and CEO at HarrisX, told Hill.TV that a national mask mandate is “less of a partisan issue than you would think.”

“Two-thirds of Republicans and over eight in 10 independents and nine in 10 Democrats are in favor of it,” Nesho said, according to the Hill.

It coincides with a recently released Morning Consult poll that shows 95 percent of Americans have worn face coverings in public places “to some extent” over the last month — a dramatic increase from the 50 percent of adults who indicated they were “always” or “sometimes” wearing a mask in public in April.

Another survey, released in July, showed that a majority of voters supported mask mandates in their respective states “punishable by fine or jail time.”

Seventy-two percent indicated they either “strongly” or “somewhat” support the idea, the Morning Consult/Politico survey found.

President Trump has strongly dismissed the prospect of implementing a nationwide mask mandate, although he has referred to masks as “good.”

“No, I want people to have a certain freedom, and I don’t believe in that,” Trump said during a July appearance on Fox News Sunday. “No, and I don’t agree with the statement that if everybody wears a mask, everything disappears.”

“With that being said, I’m a believer in masks. I think masks are good,” he added.

Dr. Anthony Fauci —  who dismissed the need for mask-wearing in March and said that a mask is not “providing the perfect protection that people think that it is” —  is now urging local governments to be “as forceful as possible” in urging the public to wear face coverings.

Many local governments are doing just that. Miami, Florida, an area hit particularly hard by the Chinese coronavirus, has reportedly deployed a team of police officers tasked specifically with implementing the local mask mandate.

Houston Mayor Sylvester Turner (D) is among the latest to take a concrete step in enforcement, announcing that police will now issue $250 fines to those who violate the mask order after an initial warning.

“Lives are at stake so I’m taking this step to drive these numbers down,” Turner said.

Critics continue to question the effectiveness of masks and the authority of the government to issue mandates of that nature. A May study from the New England Journal of Medicine made waves after it indicated that a mask “outside health care facilities offers little, if any, protection from infection.” The study repeatedly emphasized the psychological impact of universal masking on the citizenry, identifying masks’ role as “visible reminders of an otherwise invisible yet widely prevalent pathogen” and “talismans that may help increase health care workers’ perceived sense of safety, well-being.”

However, the Journal released an update on June 3, stating that the “intent of our article was to push for more masking, not less.”

Dr. Fauci has since indicated that experts “don’t know exactly” to what extent people are less likely to transmit the coronavirus when they are wearing a mask.

“We don’t know exactly,” he told MarketWatch in a July interview. “There have been a number of meta analyses. One published in The Lancet on June 1, 2020 said masks and respirators reduced the risk of infection by anywhere from 78 percent to 85 percent,” he said.

“Your guess is as good as any: 50 percent to 75 percent or 80 percent is probably correct,” he added.

Notably, the National Institute of Allergy and Infectious Diseases director has signaled opposition to a controlled study on the effectiveness of masks.

“I would not want to do a randomized controlled study because that would mean having people not wear masks and see if they do better,” Fauci said during a discussion with students at Georgetown University’s Institute of Politics and Public Service.

Fauci recently made headlines after photos emerged that showed the White House Coronavirus Task Force Member going maskless in D.C., with his mask draped around his chin at the Washington Nationals’ season opener:

And there’s Dr. Anthony Fauci showing us all he knows exactly how well masks work! Thanks for the lesson, doc. pic.twitter.com/jdHPzq5HfB

Meanwhile, workers across the U.S. are experiencing “mask fatigue,” citing shortness of breath, anxiety, and headaches.