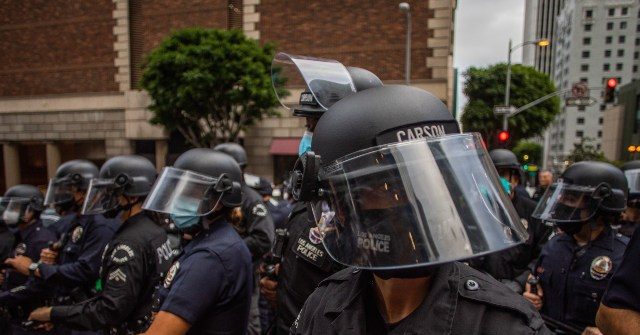 The Los Angeles County Board of Supervisors approved a proposal on Tuesday to amend the city’s charter — which will be presented to voters on November 3 via ballot — to remove $880 million from law enforcement and “reinvest” the money in “direct community investment” and “alternatives to incarceration.”

Bill Melugin, an L.A.-based reporter, reported on some of the details via Twitter:

BREAKING: L.A. County Board of Supervisors votes 4-1 to put “Reimagining L.A. County” proposal on November ballot for voters. It would strip $880 million away from Sheriff’s Department, court system, DA’s office, and redistribute it to low income areas/social programs. @FOXLA

Supervisor Kathryn Barger was the lone “no” vote, saying this proposal was rushed, wasn’t transparent, had no feedback from stakeholders, and could result in job cuts to county employees as well as budget issues down the road. Other Supervisors say let the voters decide.

The proposal would mandate at least 10% of NCC (net county cost) funding would be earmarked towards social programs, and law enforcement/legal system would be restricted from using that money in the future. Current NCC is $8.8 billion, so 10% would be $880 million set aside.

It’s 10% of NCC funding. Current NCC was about $8.8 billion. 10% of that would be stripped away and barred from any law enforcement, legal system use etc. About $3.7 billion in NCC went to those departments this year.

The proposal includes a measure to use racial criteria in determining government funding of businesses, described as “access to capital for small minority-owned businesses, with a focus on Black-owned businesses.” It also prescribes the use of “community-based restorative justice” among its “alternatives to incarceration.”

The proposal’s section addressing the defunding of law enforcement includes the following language:

Ensure that the ordinance containing the proposed charter amendment is clear that the use of any of these earmarked funds for carceral systems and any law enforcement agencies, including the Los Angeles County Sheriff’s Department, L.A. County District Attorney’s Office, L.A. County Superior Courts, or L.A. County Probation Department, including redistribution of funds through these agencies, is strictly forbidden.

City supervisors voting for the proposal are responding to the Black Lives Matter campaign and organization, Streetsblog reported. “Reimagine L.A. is one of a number of pushes locally to respond to Black Lives Matter protest demands to defund the police. Metro is taking steps toward shifting resources toward services and away from armed law enforcement. L.A. City and a few smaller cities have some initiatives that would also shift some funding.”

The initiative was approved by Supervisors Hilda Solis, Sheila Kuehl, Mark Ridley-Thomas, and Janice Hahn. It was opposed by Supervisor Kathryn Barger.