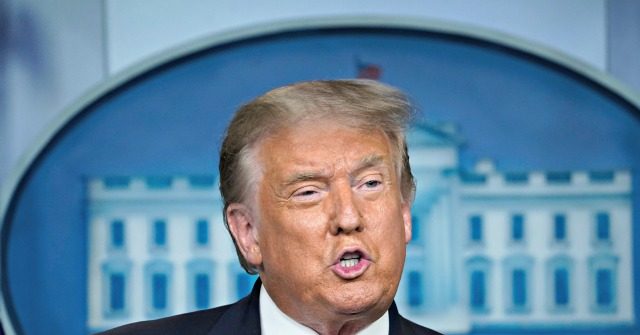 President Donald Trump on Monday repeated that a strategy of a long time or permanent lockdown was never an option to defeat the coronavirus entirely.

The president spoke about lockdowns during a press conference at the White House, saying that long term lockdowns would inflict more harm than good on the country.

He cited other foreign countries such as Spain, Germany, France, Australia, Hong Kong, and Japan, who were also experiencing spikes in coronavirus cases as an example, despite their own efforts at lockdowns.

“Lockdowns do not prevent infection in the future. They just don’t,” Trump said. “It comes back many times. It comes back.”

The president said the purpose of a medical lockdown was to buy time to build hospital capacity, to stockpile medical equipment, and study the virus for treatment – something he said the United States had already done.

Trump said that it was time to move Americans to reopen the economy and schools to keep the country running.

“We must focus on protecting those at highest risk while allowing younger and healthier Americans to resume work and school with careful precautions,” Trump said.

The president said that vaccines and treatments for the virus were moving forward.

He said the government distributed 2,979 cases of Remdesivir, a drug developed to treat the virus, to hotspot states including California, Ohio, Arizona, and Georgia.

The president noted that positive cases had declined by nearly six percent from the previous week, calling it an “encouraging sign.”

“The virus is receding in hot spots across the South and West,” he said. “We have seen slow improvements.”

The president warned of other flareups in Georgia, Mississippi, Tennessee, Oklahoma, and Missouri.

Trump said that all Americans should continue taking precautions to slow the spread of the virus.

“I urge all Americans to continue to socially distance, wash your hands, wear a mask when you cannot avoid crowded places, and to protect the elderly,” he said.