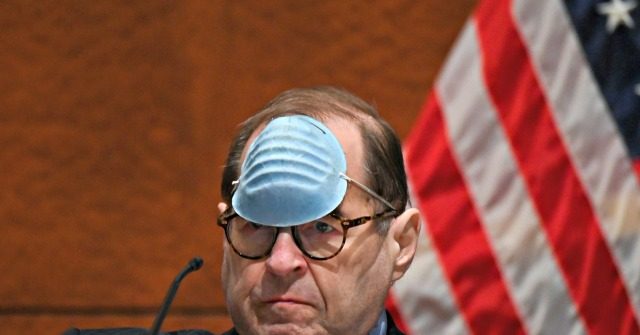 On his way to a hearing last week, House Judiciary Committee Chairman Jerrold Nadler was in a car accident.

Thankfully, the New York pol was unhurt. But the accident caused Mr. Nadler to be an hour late to the hearing.

Watching Mr. Nadler during that hearing, which starred Attorney General William Barr, you might think he had hit his head in the accident. But, alas, Mr. Nadler was already that dumb. Even before the accident, he was severely damaged goods.

In a race to a microphone on the Senate floor earlier this year during the impeachment proceedings, Mr. Schiff thought he could just take his time and slowly saunter over. Something about Mr. Nadler made Mr. Schiff think he could play rabbit to Mr. Nadler’s tortoise to the microphone.

Perhaps, it was the waiting microphone before the empty chair in the House Judiciary Committee hearing room last week that saved Mr. Nadler’s life. No mere automobile accident would keep him from holding court — especially when he himself is the court jester.

As it turned out, the automobile accident was so minor that the airbag did not deploy — until he got seated in the hearing room. And then the giant airbag EXPLODED.

“You really can’t hide behind legal fictions,” Mr. Nadler raged at Mr. Barr, who had just explained that as a member of President Trump’s Cabinet he was not at liberty to divulge privileged discussions with the president.

Though Mr. Nadler attended law school, it is not clear if he was ever a terribly successful lawyer. Somewhere along the line, however, he got struck with just enough common sense to realize that the rioting in the streets that he and fellow Democrats refuse to condemn and Mr. Nadler is on record calling “a myth” does not look very good heading into an election.

So, Mr. Nadler sought to blame the riots on Mr. Barr and, by extension, on Mr. Trump. Yes, Mr. Nadler — AKA the exploded airbag — blames the riots on the only people who are lifting a finger to curb the riots and enforce, you know, the laws. You know, the ones arresting rioters for assaulting innocent people, firebombing public buildings, torching police cars, and using lasers to blind officers.

“The president wants footage for his campaign and you appear to be serving it up to him as ordered,” Mr. Nadler wheezed.

Yes, the looting and arson and bloodshed, the roping of statues in Washington, D.C., and Portland, Oregon, is all the fault of President Trump. And Bill Barr.

The whole hearing proved as enlightening as a clown car smash-up derby. Nobody was actually seeking answers. They just wanted to scream at Mr. Barr. And, whenever the attorney general offered to reply, they shouted, “Reclaiming my time!”

As Mr. Barr noted, this is not normally how hearings go. Usually, the government official (in this case, Mr. Barr) is required to provide actual answers to actual questions posed by the committee.

But these are no more “hearings” than the bloodthirsty arson and mayhem in the streets are “protests.”

It’s all smash-and-grab politics and Jerold Nadler is the mythical airbag lording over all of it.