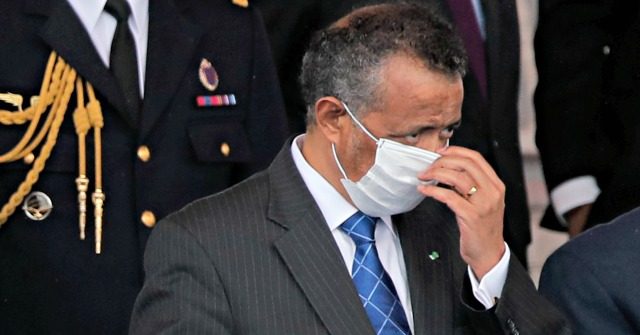 The head of the China-influenced World Health Organization (W.H.O.) argued on Monday, amid the rush to discover an effective vaccine against the coronavirus in the U.S. and beyond, that there may never be a “silver bullet” for the lethal and contagious disease.

“We all hope to have a number of effective vaccines that can help prevent people from infection,” W.H.O. Director-General Tedros Adhanom Ghebreyesus said during a virtual press conference on Monday. “However, there’s no silver bullet at the moment, and there might never be.”

His comments came only days after the W.H.O., a United Nations entity, revealed on July 31 that it is tracking the development of 165 coronavirus vaccines across the world, including in the U.S., China, Russia, and the United Kingdom.

More than 20 of those vaccines are already in clinical trials, the U.N. agency revealed. Several nations, including the United States, are also working on developing therapeutics for the virus, including new antibody treatments and drugs.

COVID-19 (coronavirus disease) has plagued the world, resulting in lockdowns that have triggered a catastrophic economic crisis, deadly health problems, and other social ills like an increase in domestic abuse.

Many governments, including leaders of some U.S. states, have cautioned that life can return to normal only once their populations have built up antibodies to combat the virus through a vaccine.

Nevertheless, the W.H.O. chief urged governments and citizens, instead of putting their faith in a vaccine, they should focus on what is known to work against the coronavirus, including testing, contact tracing, maintaining physical distance, practicing good hygiene, and wearing a mask.

For now, stopping outbreaks comes down to the basics of public health and disease control. Testing, isolating, and treating patients, tracing, and quarantining their contacts. Do it all. Inform, empower, and listen to communities. Do it all. For individuals, it’s about keeping physical distance, wearing a mask, cleaning hands regularly, and coughing safely away from others. Do it all.

Tedros crushed the firm hopes for a vaccine amid the ongoing global race to develop and mass-produce an effective one.

In the United States alone, there are about a dozen vaccine candidates, including five or six backed by the federal government, going into the final part of a three-phase clinical trial process over the next few months, Dr. Anthony Fauci, the top infectious disease expert in America, proclaimed last week.

One of those candidates is already in Phase 3, Fauci, a member of the White House Coronavirus Task Force, also noted, adding that the prospect of a vaccine is no pipe dream.

There’s never a guarantee that you’re going to get a safe and effective vaccine. But from everything we’ve seen now in the animal data, as well as the early human data, we feel cautiously optimistic that we will have a vaccine by the end of this year and as we go into 2021. So, I don’t think it’s dreaming … I believe it’s a reality.

Trump has promised to develop a vaccine in record time through his administration’s multi-billion-dollar Operation Warp Speed.

Earlier this year, the Trump administration suspended U.S. funding for the W.H.O., asserting that the U.N. agency helped China hide the extent of the viral outbreak during its early stages and mismanaging its global response.

Last month, The Trump administration formally withdrew the United States from the W.H.O.

The U.S. was the agency’s top source of funding.