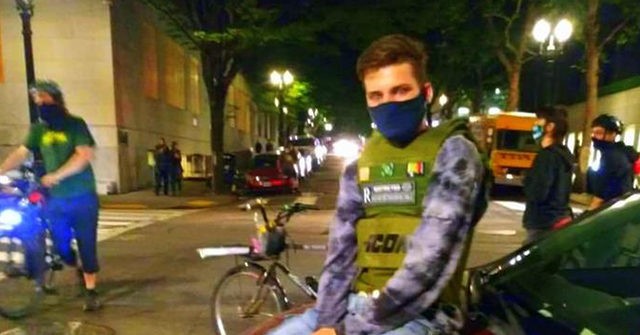 A 69-year-old Trump-supporting grandmother outed her grandson as the suspect who allegedly threw a makeshift bomb outside a Portland, Oregon, federal courthouse Tuesday.

In the hours after the attack, social media users sifted through videos showing a slim man wearing an olive-colored vest with the word “ICONS” printed on it, throwing an item over the fence at the Mark O. Hatfield Courthouse.

Rioters threw a bomb at the front of the Portland federal courthouse. This wasn’t one of their usual firework explosives. #PortlandRiots #antifa pic.twitter.com/omCq0GtZMj

Within seconds, there’s an explosion that covers the courthouse’s front door in flames. The suspect picks something up from the group and slips away from the camera’s view.

Fox immediately recognized her grandson because she gifted him the vest.

“I bought the vest for him after he found one online after getting hit with rubber bullets the night before at the protest,” Fox told the Post. (She even left a positive review on clothing site Hibbett: “I got this for my grandson who’s a protester downtown, he uses it every night and says it does the job.”)

Agard-Berryhill told the Post via text message Thursday that he admitted misguided involvement, but did not outright say he was the bomber.

“The device I’ve been accused of allegedly throwing was allegedly given to me by an unknown [protester] with full face coverings,” he wrote. “I was allegedly told that it was a strobe firework that wouldn’t damage the building or harm anyone around it.”

Later that evening, Agard-Berryhill spoke with his probation officer and turned himself in. U.S. Marshals arrested him and booked him into the Multnomah County Detention Center.

Authorities charged him with felony arson, and he faces at least five years behind bars if convicted. He was released without bail.

The alleged bomb-throwing shocked Fox, a conservative who supports President Donald Trump and claimed that she did not know her grandson’s politics.

Fox says her grandson told her last week that he was peacefully protesting and “protecting a girl.”

“I believed all his stories,” Fox says. “He said he was just hanging out at Riot Ribs [an anarchist food co-op] and doing peaceful things.”

Fox said her grandson is on probation for a felony conviction from when he was a minor. She said he spent two years at Rogue Valley Youth Correctional Facility in southern Oregon and spoke about changing his life for the better and getting a job at Amazon.