Over 20,000 mostly maskless Germans marched through the streets of Berlin today, reclaiming their freedom and calling out burdensome restriction installed by Chancellor Angela Merkel.

They held up homemade signs with slogans like “Corona, false alarm,” “We are being forced to wear a muzzle,” “Natural defense instead of vaccination” and “We are the second wave.”

They chanted, “We’re here and we’re loud, because we are being robbed of our freedom!”

Police used bullhorns to chide participants to adhere to social distancing rules and to wear masks, apparently with little success. They tweeted that they drew up a criminal complaint against the rally’s organizer for failing to enforce hygiene rules, then said shortly afterward that the organizer had ended the march.

The demonstrators were kept apart from counterprotesters, some of whom chanted “Nazis out!”

Protesters continued to a subsequent rally on a boulevard running through the city’s Tiergarten park, which police estimated drew 20,000 people. Police declared that event over as organizers again failed to get demonstrators to wear masks or keep their distance. 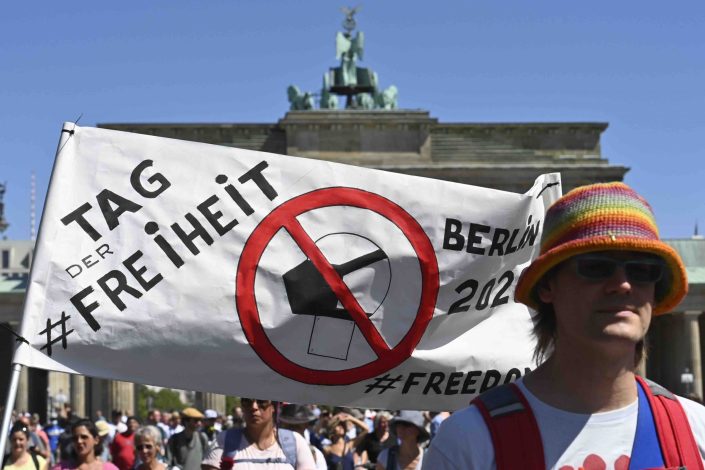 🇩🇪 #GERMANY – Thousands of Patriots protest today in #Berlin against the Merkel government.pic.twitter.com/cWuGIaXVQ3