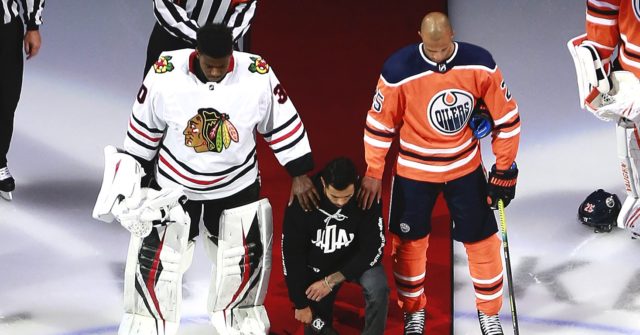 Matt Dumba of the Minnesota Wild became the first player to kneel for the U.S. national anthem in the National Hockey League (NHL) on Saturday night before the Chicago Blackhawks faced the Edmonton Oilers in Alberta, Canada.

Dumba, who is Canadian, was invited onto the ice for a special ceremony, walking down a red carpet and delivering a speech about racial justice. He knelt for “The Star-Spangled Banner,” but stood for “O, Canada,” the Canadian anthem.

The scoreboard flashed a slogan with a hashtag: “We Skate for Black Lives.”

“During this pandemic, something unexpected, but long overdue, occurred,” Dumba said, during his speech. “The world woke up to the existence of systematic [sic] racism and how deeply rooted it is within our society.”

He added: “Racism is everywhere, and we need to fight against it.”

As he knelt, Blackhawks goalie Malcolm Subban and Oilers defenseman Darnell Nurse each put a hand on his shoulders.

Incredibly powerful words by @matt_dumba, representing @theHDA2020. Here is exactly what he said, before kneeling for the Star Spangled Banner. pic.twitter.com/WJSCzRHGm1

Just a few days before, the New York Islanders and New York Rangers had stood together for the national anthem prior to an exhibition match, drawing praise from many fans — and criticism from those who wanted the league to join other professional sports that have supported the “Black Lives Matter” movement.

The majority of active NHL players are not from the United States; a plurality are Canadian.

The game marked the kickoff of the modified 2020 NHL playoffs after the season was interrupted by the coronavirus pandemic. Chicago won, 6-4.