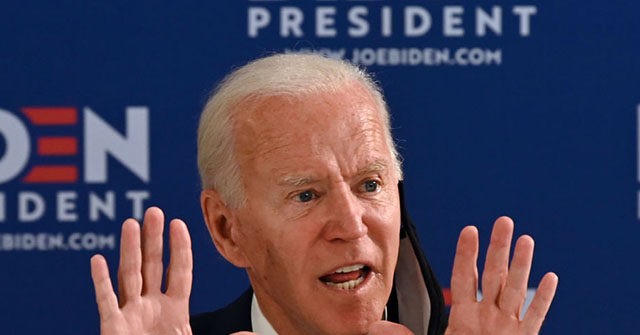 Former Vice President Joe Biden on Tuesday during a campaign speech appeared to be unaware of the Trump administration’s ongoing efforts to combat the coronavirus, at one point suggesting that President Trump do something that he is already doing.

But I want to say it again, I’m going to keep saying it. The president, as we speak, should be starting and should have started three months ago to put someone in charge of how specifically, like waging a war. How are you going to distribute the vaccine when it arrives, when it arrives, when it’s there? And the question of whether it’s real, when it’s there, that requires enormous transparency. You got to make all of it available to other experts across the nation, so they can look and see. So there’s consensus, this is a safe vaccine. Because already you have, what percent is American people saying if the vaccine were there tomorrow, they wouldn’t take it? And it’s not the usual anti-vaccine crowd it’s beyond that because people are losing faith in what the president says. Think about it.

According to the Department of Health and Human Services (HHS):

OWS is a partnership among components of the Department of Health and Human Services and the Department of Defense, engaging with private firms and other federal agencies, and coordinating among existing HHS-wide efforts to accelerate the development, manufacturing, and distribution of COVID-19 vaccines, therapeutics, and diagnostics.

Trump, as well as other senior administration officials, have said the Department of Defense will be involved in distributing vaccines when they are available.

A senior administration official told reporters during a call on Thursday that distribution would be a “joint venture” between the Centers for Disease Control (CDC) and the DOD.

“It is a combination and there’s different roles for each. And I’m being very simplistic but the DOD is handling all the logistics of getting the vaccines to the right place at the right time and the right condition,” the official said.

Things like post-vaccination, tracking of patients will be handled as you could expect by the CDC. Some of the communications through the state and the state relationships the state public health organizations will be handled through the CDC. So we believe we’ve actually combined the best of both where the CDC will do where if it has a comparative advantage dealing with the states tracking patients or, you know, those who are vaccinated thereafter whereupon we’re calling upon the resources of the department, the great vast resources of the Department of Defense to help us with all the logistics.

And it’s not just the logistics of distribution it is the logistics of manufacturing and the logistics of preparing for manufacturing as well. And it involves things like kitting, kitting, K-I-T-T-I-N-G. So, you know, we’re in receipt and we’ll continue to be in receipt of hundreds of millions of needles, and syringes, and vials. And all of those need to be prepared properly by type of vaccine. The DOD is handling all of those logistics. That’s where their comparative advantages and the CDC some of their [information technology] systems relationships with the states and following post-vaccination will belong to them.

“I don’t know what the hell he’s adding to it, except it’s good he’s wearing a mask and saying the right things, mostly,” he said.