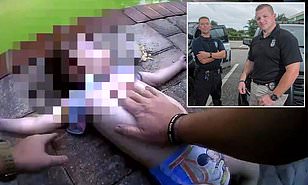 Pensacola, Florida — On June 13, 2020, Pensacola police officers received a call that a three year old girl had been found floating in a swimming pool at a residence of the north side of town. Officer Kyle Skipper was the first to arrive and saw the child’s grandmother attempting CPR. The child was unresponsive and was not breathing. Officer Skipper picked up the child and held her up off the ground and face down with one hand while using his other hand to firmly strike her back in an attempt to clear any obstructions. Officer Robert Lindblom arrived to assist, and as they were preparing to use the AED, she took a small breath.

Officer Lindblom located a pulse after giving chest compressions. The officers laid the child on her side in an attempt to keep her airway clear. The officers used their fingers to clear vomit from the child’s mouth, and the child began breathing better and began to move. The Pensacola Fire Department arrived along with Escambia County EMS, rushing the child to the hospital where she made a full recovery. The attending pediatric physician advised that the overall outlook would take time to determine, however he stated that without the efforts of the officers at the scene who got the child to start breathing, she would not have survived.