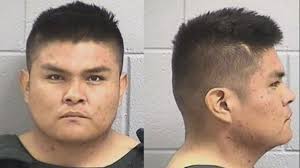 
Attorney General William P. Barr today directed the Federal Bureau of Prisons to reschedule the execution of Lezmond Mitchell, a federal death-row inmate who was convicted more than 17 years ago of the brutal murders of a grandmother and her nine-year-old granddaughter. The execution, initially scheduled for last December, is now scheduled to occur on August 26, 2020, at the U.S. Penitentiary in Terre Haute, Indiana.

In October 2001, Mitchell murdered Alyce Slim, a 63-year-old grandmother, and her nine-year-old granddaughter as part of a carjacking in Arizona. After getting a ride from Slim in her pickup truck, Mitchell and an accomplice stabbed her 33 times and threw her body into the backseat beside her granddaughter. Mitchell then drove the truck 30-40 miles into the mountains, ordered the girl “to lay down and die,” slit her throat twice, and crushed her head with rocks. Mitchell and his accomplice proceeded to sever the heads and hands of the victims’ bodies and burn their clothes. Mitchell later confessed to the murders. In May 2003, a jury in the U.S. District Court for the District of Arizona found him guilty of numerous federal crimes — including first-degree murder, felony murder, and carjacking resulting in death — and he was sentenced to death. His convictions and sentence were affirmed on appeal, and his claims for collateral relief were denied by every court that considered them.

Mitchell’s execution was initially scheduled for December 2019, but the U.S. Court of Appeals for the Ninth Circuit entered a stay of execution while it resolved an additional appeal by Mitchell. The court of appeals unanimously rejected Mitchell’s claim in April 2020 and denied his request for full-court rehearing earlier this month. When the Ninth Circuit stay formally concludes, no legal impediments will bar the execution, and it can occur without further delay.