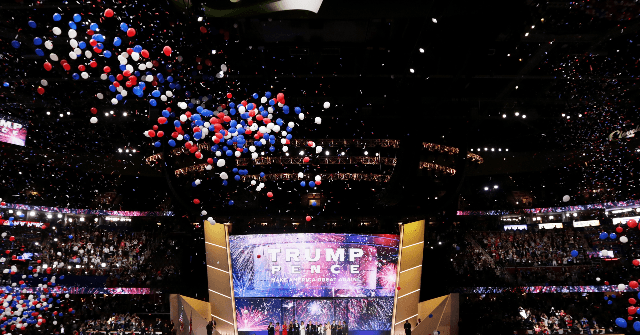 The 2020 Republican National Convention (RNC) is preparing to kick off its four-day celebration with appearances throughout the week from several prominent, conservative voices.

With this year’s convention being largely virtual due to health concerns over the coronavirus, no more than 336 delegates will meet in Charlotte, North Carolina, to formally nominate President Trump as the party’s nominee.

Below are a list of speakers and themes for each night of the 2020 convention.

Monday – “A Land of Heroes”

Tony Sayegh, who is managing the program for the GOP convention, joined Washington Political Editor Matt Boyle on Breitbart News Saturday over the weekend to discuss the event.

“Obviously this has been a very unconventional convention,” Sayegh told Boyle of the virtual convention. “We have transformed this into something unique.”

“It really doesn’t matter where it ended up,” Sayegh said in regards to the location of the convention. “We have the best message and the best messenger in the president. And we have four years of great, great progress in this country that is almost unparalleled in this period of time that we want to highlight.”

“We are turning our convention over to the American people, the forgotten men and women in this country that the president has dedicated his presidency to fighting for,” Sayegh continued. “We’re gonna have a people’s convention, much to the opposite of what the Democrats did with their political, establishment elite stars.”

Sayegh also said the convention would heavily focus on the “consequences that would come from a Biden administration.”