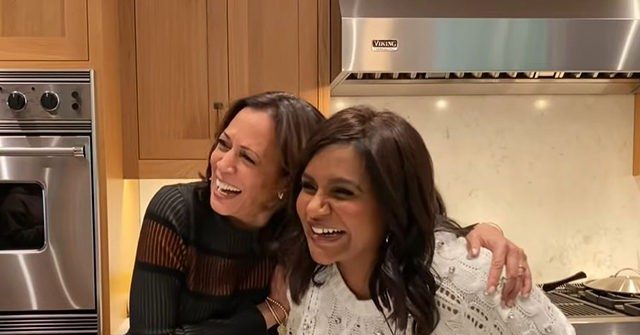 Cringey moments served as an unfortunate hallmark of Sen. Kamala Harris’s (D-CA) flailing presidential campaign – a phenomenon that worsened as she continued to fall in the polls.

Harris, who once bragged about her status as a “top tier candidate,” resorted to desperate measures after her steady collapse in the polls. She embraced a number of unconventional and cringey methods in efforts to garner support. Here are some of her most awkward attempts to win over the hearts and minds of the Democrat Party over the course of her bid.

1. Harris said she was “f*cking moving to Iowa.”

A reporter overheard a frustrated Harris telling a colleague in September that she was “f*cking moving to Iowa.” Word got out, and the Harris campaign tried to capitalize on the otherwise embarrassing moment, with her communications director Lily Adams promoting a shirt quoting her boss:

2. Harris made good on her word to “f*cking” move to Iowa yet still failed to garner support, even after making dinner in Iowans’ homes.

Harris eventually succumbed to her mounting frustrations and opted to go “all-in” on Iowa in hopes of reviving her campaign. She even resorted to making meals in supporters’ homes.

Harris, who is currently polling with three percent support in the Hawkeye State, is trying a different approach, focusing on intimate meetings and small-scale events rather than large gatherings. The Los Angeles Times reports that Harris is actively “making dinner in supporters’ homes and dropping in on small businesses, in hopes that one-on-one encounters can help close the deal with caucus-goers who will make or break her presidential aspirations.”

That strategy is not necessarily new for Harris, as she reportedly helped “prepare Sunday suppers in peoples’ homes” as part of her Hawkeye State blitz last month.

The then-presidential hopeful was attempting to explain how she would  unite the “Obama coalition” in the White House, before slipping into a southern accent:

According to reports, the individuals left as soon as Harris finished delivering her speech:

Kamala Harris’s speech at the DNC was boosted by a cheering section of about 40 people that her campaign brought in, erupting every time she hit a big line — and then that group got up and walked out as soon as she finished

Last month, Harris posted a lengthy video detailing a baking session with a young supporter and showed off her skills, particularly by cracking an egg with one hand.

“Oh, look at how that just bends, right?” Harris said, marveling over the final product.

“It’s just a peanut butter, oatmeal, chocolate chip cookie in one,” she continued. “I now realize what this is”:

Some of the best conversations happen over a batch of cookies. pic.twitter.com/xFDbbpspak

The video featured the two discussing their shared heritage and also highlighted Harris’s cooking “skills” –this time, her ability to finely chop an onion.

“OK, Sen. Harris, I say this with respect, you’re kind of a show-off,” she continued, prompting laughter from Harris.

“It’s like, meanwhile it’s taking me 20 minutes to do this much ginger. OK, what can’t she do? You got my vote,” Kaling added:

Who else keeps their spices in Taster’s Choice jars? ⁰⁰Turns out @MindyKaling and I have more in common than we initially thought.

7. Harris danced with supporters at the Polk County Democrats steak fry in September.

Harris happily danced alongside supporters during an appearance at the event, which featured thousands of sizzling steaks. Her appearance followed her suggestion that the government should reshape dietary guidelines and find incentives to curb certain behaviors – like beef consumption – in order to combat climate change:

I don’t know if you heard, but I’m moving to Iowa!

Thank you, @PolkDems, for putting on a fantastic #SteakFry and giving us the opportunity to bring our campaign directly to Iowans. We’re going to win this thing by coming together and fighting for the best of who we are. pic.twitter.com/z6gu9sBe6g

8. Harris danced with another drumline during an event in Las Vegas, Nevada, last month:

On at least two occasions, Harris cited her battles with former Attorney General Jeff Sessions, Attorney General William Barr, and Supreme Court Justice Brett Kavanaugh as examples of her record as a fighter. However, all three were ultimately confirmed.

“And to fight this fight, I believe we have to have the ability to not only have a nominee who can go toe to toe with Donald Trump, and I have taken on Jeff Sessions. I’ve taken on Bill Barr. I have taken on Brett Kavanaugh,” Harris said during her closing statement during the last debate.

She highlighted the same point earlier in the month, prompting mockery from many social media users:

It’s been three years to the day since our national nightmare was elected president. Since then, I’ve taken on Jeff Sessions, Bill Barr, Brett Kavanaugh, and more in the Senate. And I’m ready to defeat Trump in 2020. pic.twitter.com/MAlNzBWFhB

Texas State Rep: Hard to Imprison Trump If He Dies from Coronavirus